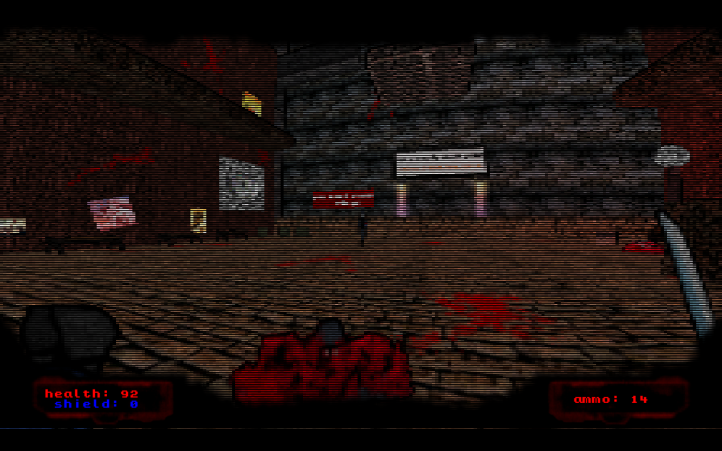 It’s been a while, but I’m finally looking at another game in my inbox. Today we’re looking at the demo for SUFFER, by Anarchy Softworks, a one-man studio.  The title screen might not give the best first impression, being some busty ninja lady on a fuzzy background, but stick with me here.

What is the story in SUFFER? There really isn’t one. SUFFER prides itself in being a retro styled shooter, just sorta throwing you into a demon infested world. Thematically, anarchy is the name of the game, mixing in anti-capitalist imagery with cops being a frequent enemy alongside the demons, while WWII era propaganda posters from all sides of the war dot the land to set up a general anti-authority atmosphere. But it’s also a game that appeals to the more generic notion of anarchy, which is to revel in chaos and fuck shit up.

A lot of the general elements of the game feels like the amalgamation of what an edgy kid that played a lot of DOOM would consider to be cool. Blood is splattered everywhere alongside graffiti frequently declaring how fucked you are and how everything else is fucked. Demons run rampant, bodies sometimes hanging from ceilings as morbid level details. You are in hell, and you are also sticking it to the man, blowing enemies away into mists of blood. However, it leans so far into this that it’s weirdly charming. SUFFER in fact seems to be self-aware of its nature, with the protagonist boasting how badass she is or simply saying “yay” when finishing the level in a distorted voice, coming off as silly. Then there’s also the seemingly pointless taunt button, with her just flipping the bird and yelling expletives, reveling in fun brutality.

What sort of adds soul to the whole thing is how the game presents itself. The game has a very lo-fi look, the world looking fuzzy and distorted. If you don’t like the visuals from the screenshots, it’s honestly one of those games that looks better in motion. Taking hits briefly causes your vision to distort with color and getting downed entirely drowns the world in a colorful static. It lends this feeling that you’re watching some B-movie on VHS. Combined with the edgy aesthetics, it creates this sincere vision of a goofy yet gory world that I ended up liking. It’s sort of like when I watched Hobo with a Shotgun. I’m normally not into gory movies, but that movie leans so hard into it and gets so goofy with the violence that I found it entertaining and fun.

But what really ties the game together is the music. Heavy guitar and bass dominates the soundtrack, chiptunes occasionally being thrown into the mix to make up a punk video game soundtrack. You got some high energy riffs to accompany your brutality, alongside tracks with strumming that establishes a horror atmosphere. Like, I’ll be honest, I was initially hesitant to check out the game, mainly because I get a bunch of emails and I’m a huge dumbass with limtied free time, but I took a listen to the soundtrack and it ended up selling me on this. Being a one-dev studio, the developer recorded all these songs himself, which shows a strong commitment to SUFFER‘s stylings and the effort and passion that goes into the game in general.

So, what of the actual gameplay? As SUFFER advertises itself, it’s meant to be a tribute to old first-person shooters. Although, SUFFER has more of a focus on platforming, granting you a double jump and a gravity defying dash. The first batch of levels start small, just sort of easing you into the game’s mechanics. After the level “Entropy,” however, the game feels that you’ve learned enough of its rules and starts throwing larger levels at you, cranking up the enemy count and difficulty.

When it comes to the standard action, it’s done well. You got a default sword attack that can make mincemeat out of most enemies, and as somebody that loves impractical melee options in games, having it be a practical one is good shit. The effects when you get hurt and enemy grunts makes the action feel punchy, enemies exploding into red mist and collapsing into a pile of viscera making for satisfying kills.

That said, it’s not perfect. As much as I like the game’s aesthetic, the fuzziness may make some enemies hard to see. The worst case though are the cop enemies, who wear dark clothing and thus also blend into the often dark environments, like true bastards. While chatter announces their appearance, that and the fact that they’re a bit too quick on the draw makes sure you take a bunch of hits before you can get them. As these enemies appear frequently, it’d help if they were made to stand out a bit more.

I’m sort of divided on the game’s platforming aspects. As a means of exploration, platforming is a nice addition and a must if you need to find extra resources. But then there are the few dedicated platforming segments that take place over insta-kill pits or poison, which was less fun and more frustrating. I got stuck for a bit at “Poison Pit,” which requires some precise jumping to advance, and you know, if I were to get stuck in a first-person shooter, I’d expect it to be at a part where I’m getting fucked up by a boss or a horde of enemies, not a platforming segment.

Now this is more of a suggestion more than anything, but I kinda wish that there were more movement options for the dash. Regardless of what direction you hold, you’ll always dash forward (which is more of an awkward shuffle in place if you were holding back). I think that it’d be neat if you could dash to the side or dash backwards depending on what direction you’re holding so that it could be used as a form of strafing.

Also, remapping buttons would be nice. Mainly because I use “Alt+letter” as a shortcut for taking quick screenshots but found out that it was the suicide button, which is pretty much why I don’t have any cool screenshots of me shooting stuff.

While I had some issues, I generally found SUFFER to be fun and a lot of my appreciation for the game comes from the sincere passion in its cultivated aesthetic. I’m hoping to see this game improve in the future and look forward to it getting finished.