Alyssa lived her life under the oppression of a magic wielding evil empire and watched as they took everything from her. And so, she rose up against the empire, fighting in memory of those she lost, their hearts united as one against the empire of the Guardianship! Alas, Alyssa has been captured by Guardianship goons and they’re trying to wipe her mind – but as soon as they let down, she’ll harness the power of friendship and defeat them! Truly, she is an ideal JRPG heroine!

It’s a shame that you’re playing as the villains in this story. 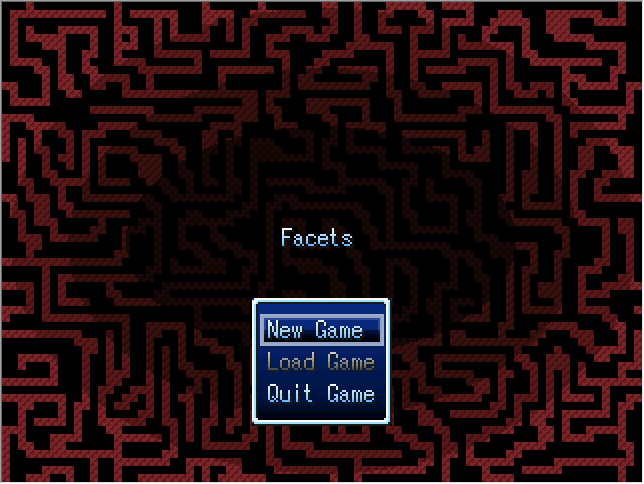 Facets is a game made in RPG Maker 2003 by John Thyer, where you are the JRPG villain. You may ask me, “Dari, aren’t you friends with John?” Well, I am, but he playtested my game Fishing Minigame 2 and gave honest criticism, so I thought it’d be fair to do the same.

You play as Ellis, Claire and Rory, agents of the Guardianship that decide to dive into the mind of Alyssa instead of executing her. They aim to erase the memories and emotions that make her her, which take the form of beings called “facets.”

Facets is a game that’s very minimalist in scope. There are no random encounters, just the ten pre-ordained boss fights with the facets. Instead of merely healing HP, potions now heal everything, the effects of all handy recovery items condensed into one to avoid have to finagle with menus. EXP is non-existent, the skill sets of the characters readily apparent. Cutscenes between areas are simple text monologues against a black screen, choosing to go for evocative narration over grandiose cutscenes of tiny pixel people running around.

While you should ideally explore the environment for the game’s limited healing items, the main goal is to slay the facets. Each fight is unique, with facets displaying different behaviors. The worm facet (most likely to be your first one), attacks for a few turns before deciding to be smart about things and starts buffing its attack to hell until it’s capable of one-shotting your characters. The succubus facet, in the meantime, slowly marks party members to die, constricting them and removing them from battle – while also leaving the character with her weakness for last to give the player a fighting chance. I’m actually surprised by how controlled these boss battles are, because with a lot of the RPG Maker 2003 games I played, enemies just do whatever the hell they want. 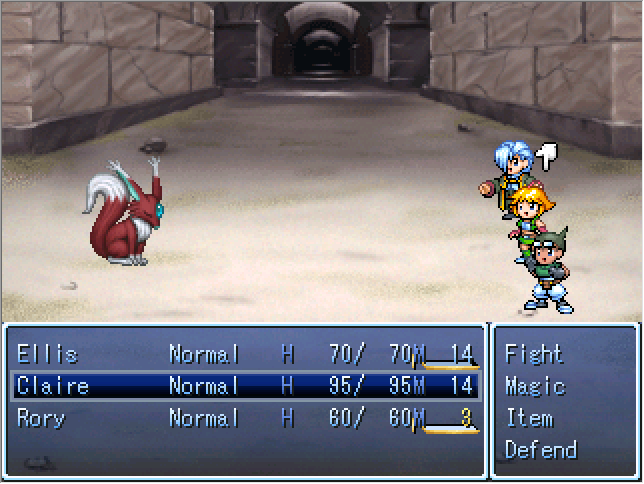 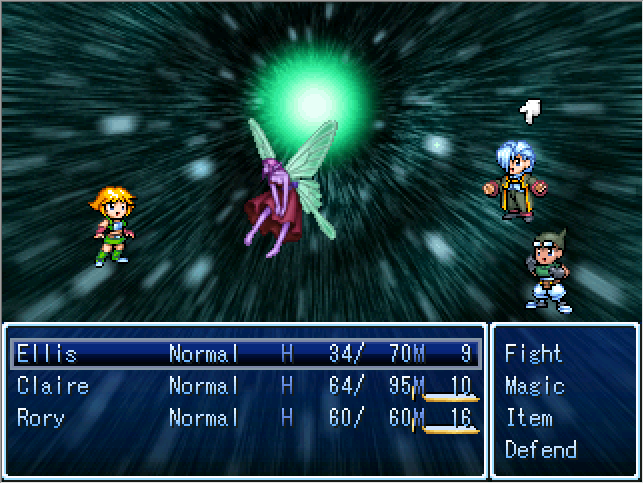 In general, the game is carefully balanced. The fights are difficult, but you have everything you need to get through these battles. Part of this balance is maintained with how skills are spread across your characters. Rather than have a dedicated healing character whose death could easily set you back, each character has a different healing skill, so that all of them have a use while the death of one character may not set you back too much.

This balance is maintained further by potions being limited. Players have to be more conscious with how they use them; like, say, would you use a potion to restore a character’s MP, or would you wait for them to die so that you can get full use out of it, even if you have to risk waiting for their turn? All this combined with the fact that you don’t heal after fights turns Facet into a game of attrition, trying to beat down the facets effectively while sustaining what little resources you have. Truly, it’d be an inspiring story if you weren’t the bad guy. Overall, the battles in the game are actually enjoyable, which is something that I don’t expect a lot of people would think with regards to RPG Maker 2003’s battle system. 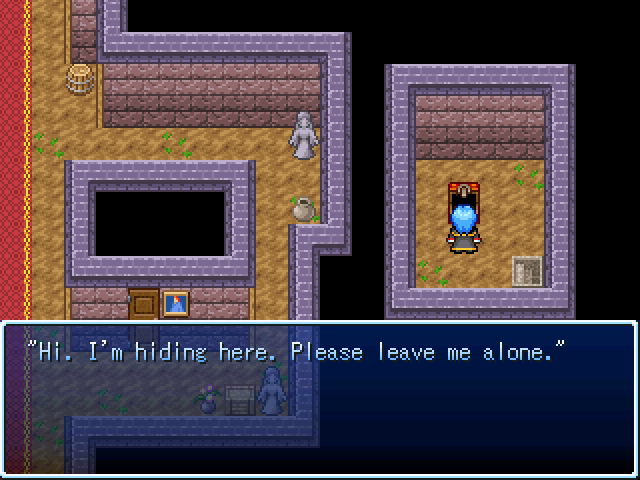 The environments in the game are screwed up looking labyrinths, representing places in Alyssa’s mind trying to hide away her facets. The maps initially look normal, but going deeper into Alyssa’s mind shifts the world to being more abstract. If I had to make comparisons, it’s like if the level design in Yume Nikki was stuffed into a proper RPG. In fact, I actually asked John about this in private and he said that this was his attempt at making a Yume Nikki-like RPG. I actually like the first two areas of the game, because they feel like distortions of Alyssa’s memories and for a maze, they’re rather meticulously put together.

The third area absolutely sucks though. I didn’t like huge looping mazes of plain tiles on top of parallaxes in Yume Nikki and I sure didn’t like it here. I mean, it makes sense in the context of the game, but also I hate it. The Hell Maze is bad, John.

Facets makes gleeful use of the default RPG Maker 2003 assets, if one look at the game doesn’t tell you that. However, that’s not a bad thing. While I know that plenty of people would turn their nose at a game that uses pre-made assets (see: that asset flip nonsense on Steam), I believe that it’s the tool user, not the tools that affects the quality of a game. It’s about how effectively these pre-made assets are used and when it comes to the environments, I think they’re used well. I’m more mixed on the usage for battle sprites though. The default battler sprites used for the villainous protagonists are just kinda goofy looking to me, though I suppose that’s Enterbrain’s fault more than anything. I also feel that some of the enemy sprites don’t match the gravitas of the fights they’re used for; it’s honestly hard for me to take the embodiment of Alyssa’s rage taking the form of an army of recolored slimes very seriously.

Facets brings an interesting premise and combines it with difficult but satisfying fights. While there were a few things I disliked (I’m not going to stop saying that the third area is hell), I overall enjoyed Facets and if hard fights are your thing, you’ll probably enjoy it too. 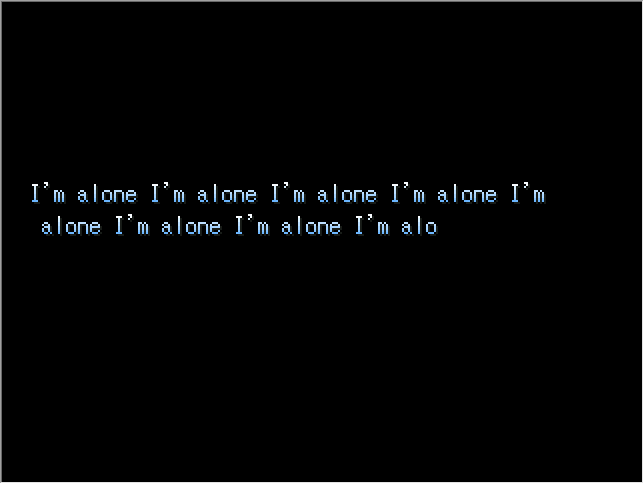