The Thief of Wishes

There’s something that I’ve been ignoring when it comes to indie games, and that’s the mobile market. As my April Fool’s post may indicate, I mainly just play Final Fantasy gacha games on my phone, in my continual spiral toward self-destruction. The only mobile game that I’ve seriously looked at for this site was Highwind (which, by the way, recently updated, so check that out!). So you know what, let’s check out more mobile stuff.

The Thief of Wishes is the first game by All Blue Studios, a Polish development team. The game is an interactive storybook that’s aimed at kids, with narration to go along with it. Does this qualify as a visual novel? As far as my tagging system is concerned, yes.

For disclosure, the developers offered me a download code to play the full version of The Thief of Wishes. I would have been fine playing the Lite version, but they felt that it wasn’t fully representative of the experience.

There was once a fountain that granted people wishes, but, a nefarious bird, the Thief of Wishes, started stealing the coins that people threw in. When he attempted to steal the fountain’s final wish, he ended up getting sealed away for his greed. Years later, a book loving girl named Catharine is reading about this legend and finds that the pages are tarnished, so, she sets out to her uncle’s house, only to get caught up in that very legend.

It’s a story that’s in the vein of old fairy tales and I think it does that well. It’s not high literature, but also – the intended audience is children. There’s lower quality standards, though, that doesn’t mean people should just make them garbage and call it a done deal. I think that good kids’ media is kid friendly while also not being condescending and it succeeds in doing that. The writing and narration feels friendly while not feeling like an insult to your intelligence and there’s a lot of lighthearted silliness with occasional darker bits, like the blatantly bad ending.

Speaking of that, there’s the whole interactive thing. Occasionally, players get dialogue options. These choices mainly give alternate dialogue, with the choices toward the end giving different endings. I wish that there were more choices, though. I’m not necessarily saying they have to be meaningful choices, but all the choice trees just has two decisions, so there isn’t a lot to play around with. To me, it doesn’t feel like it lives up to the potential of being an interactive story.

However, that’s my main gripe with the game. The rest of the stuff is enjoyable for the standards I set for the game. 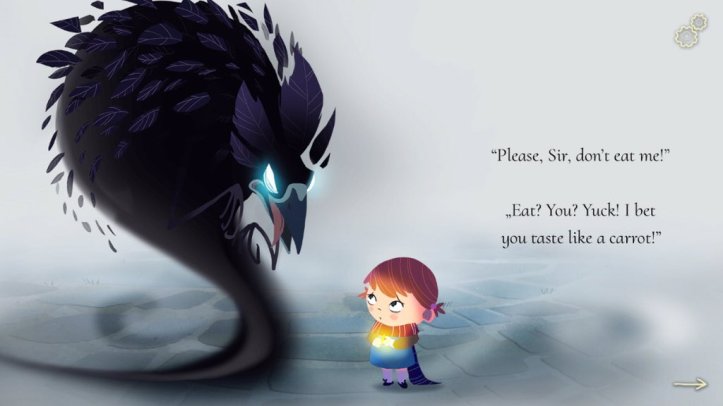 Like, there’s the game’s art, which is pretty vibrant, picture book-core stuff. The Thief of Wishes is ordinarily very colorful, with the world dipping into atmospheric grays and blues when the story shifts to darker territory. I gotta say, I really love the design of the eponymous character. That’s a good demonic looking bird, right there. This is prime kid picture book material and it’s probably better than a lot of that stuff, to be honest.

Personally, The Thief of Wishes is a game that takes me back to elementary school. Ever have story time, like, when you and your classmates gather around as the teacher reads? The game is pretty much that experience. A nice friendly voice reads, changing tone and inflections for different roles, giving the story this liveliness that kids can probably get into. I’m not the target audience for the game, but it’s wholesome. I ended up walking away from the game with a good mood, despite it not being my thing.

Outside of the story, there’s a matching game that you can access in the main menu. It’s real easy, but also, I am a grown adult and this is aimed for kids. As far as I know, this could be like, I dunno, the Dark Souls of matching games for kids. The developers are planning to add more minigames in the future, so there’s some more stuff for kids to play around with after they’re done reading the story.

The Thief of Wishes can also be played in Polish and a later update plans to add Chinese. I don’t know if the developers plan to add more languages, but hey, it’s always good to makes games more accessible to other audiences.

I looked up the costs of picture books for kids on Amazon and while Kindle and Audible books tend to be cheaper than their traditional counterparts, on average, they cost more than the $2.99 The Thief of Wishes asks for. Each playthrough is really short… but also, so is reading an actual picture book.  Despite its simplicity, The Thief of Wishes would be a good time for kids that like stories and its something that I recommend.