So, we continue looking at some past games made for past IGMC’s as I help out on my team’s entry for that. We at the Gay Punk Squad will hopefully finish Crime Nirvana before the deadline.

I was originally going to check out Corrine Cross’s Dead & Breakfast, which was the 1st place winner overall for IGMC 2015, but the download link for the IGMC version of the game seems to be dead. Thank goodness IGMC 2017 is on itch.io, land of free game hosting that isn’t likely to dead link.

I was also going to look at a game called Free Spirits, winner of the RPG Maker engine prize (not to be confused with Grist of Flies, winner of the RPG genre prize), but then I found out that there was some bad stuff between the creators and I don’t want to elevate that kind of stuff. So, I stepped away from my comfort zone of RPG Maker games to check out the 2nd place overall winner, Nanuleu. 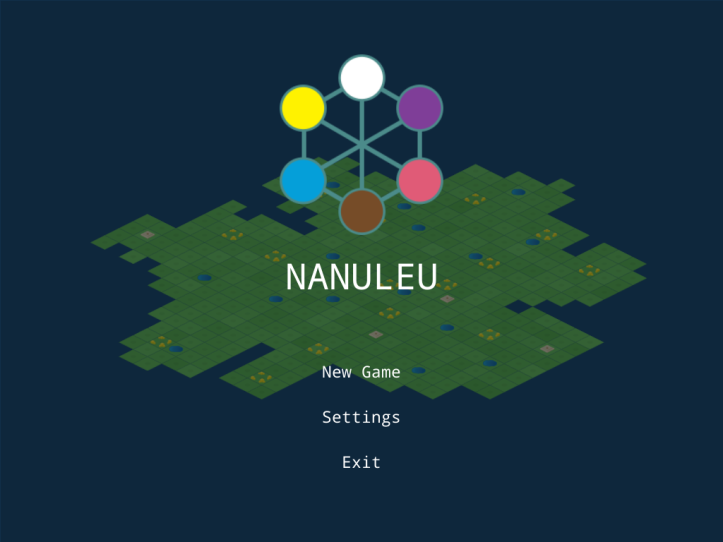 Nanuleu is a game made by the members of Selva Interactive, consisting of Carlos Villagran and Alhvi Balcarcel. Unlike the other IGMC games I looked at, Nanuleu was revisited and polished and can be bought on Steam or Humble for $2.99. For the sake of keeping consistent with past writings, we’ll be looking at the version released for IGMC as is.

So, Nanuleu is a minimalist RTS game. Now, I am somebody that hasn’t had a lot of experience with RTS games and I’m also somebody that gets easily overwhelmed by them. I was initially hesitant to check this game out because of it, but, you know, you gotta try new things sometime.

You start out as a lone tree, with the promise of invaders coming. In preparation, you begin to literally branch out, spending water and mineral points to get more territory. You can then branch into spots where water and minerals lie and you can spend those resources plus a seed to plant a tree to harvest them for the long-game.

After a short bit of screwing around, a pod appears and spawns a shadowy enemy. There’s two types of enemies (at least in the IGMC version) – a small one that can attack at range and a tanky one that gets up close to smash your things. This first enemy will try to wreck your shit, but it’s only then do you unlock the Protector Trees. Unlike the resource gatherers, these could be placed wherever your branches have reach, acting as your defense against the shadowy hordes.

After dealing with the first threat, you can now plant seed-generating Life Trees at certain spots and must do so to move on. The Life Trees can generate seeds, but they also have this extra mechanic of acting as a screen-clearing bomb when planted. I feel that it could have been better utilized though, as you don’t really get a chance to take advantage of this after you’re required to plant them. Your only chance to replant them is after they’re destroyed and well, if a Life Tree gets destroyed, it’s likely that the spaces around them are also getting destroyed and so it’d be hard to rebuild up to the point where you can use it, if at all.

And so, after your required Life Tree planting, you can finally do something about those enemy pods with War Trees. You can now plant your own pods to make your own soldiers, who will fight against the enemies as well as destroy their dang spawners, which I’m guessing is how you win.

Don’t let the calm music and the minimalist stylings lure you into a false sense of security, because the game gets surprisingly hard. As you extend your branches all over the place, more enemy pods begin to grow, new batches sprouting in different areas until the whole playing field is surrounded by them. If you’re not on top of things, you can lose control of part of the map, which tends to quickly snowball into a game over. Though, as I said before, I’m not an RTS person, so it’s more likely that I’m bad at the game. That said, I kinda wish that enemies wouldn’t spawn like crazy.

Despite the difficulty and my inexperience with RTSes, I kept at it. The game’s simple mechanics makes it easy to just hop right into the game, even for me, a complete idiot. I kinda feel that anyone that’s never played an RTS can easily grasp what to do and get sucked in. It also helps that the game’s map and tower placements are randomized every new session, so games aren’t exactly the same. Well, my games all end the same with me getting annihilated, but at least the journey there is different.

I also have to say that Nanuleu feels like a complete experience. Unlike other IGMC games I played, there wasn’t a sense of something being missing. There wasn’t a point where I thought, “this could be better if the creators had more time to work on it,” because it already felt finished. While Nanuleu does have that expanded version on Steam, its IGMC counterpart feels like it accomplished in doing everything the creators set out to do.

Nanuleu isn’t my speed, but, it’s easy to understand, easy to get into, and it feels like a complete package by game jam standards. As a game jam entry, it’s pretty remarkable and I feel that it deserved its high ranking. It’s worth checking out and if you like it enough, consider looking at the retail version while you’re at it.