After a year hiatus, the Indie Game Maker Contest is back, geared toward RPG Maker games to accompany the Humble Bundle sale. I’m actually working with a friend to make something for it and I guess you can check on progress of that on my Twitter.

But Indie Hell Zone is here to talk about other games and in honor of IGMC, I’m spending the rest of this month to look at past IGMC games. I’ve previously looked at Grist of Flies, an RPG Maker game that I wish hasn’t disappeared into the ether. Today, let’s take a look at a shmup game, Bosstardian. 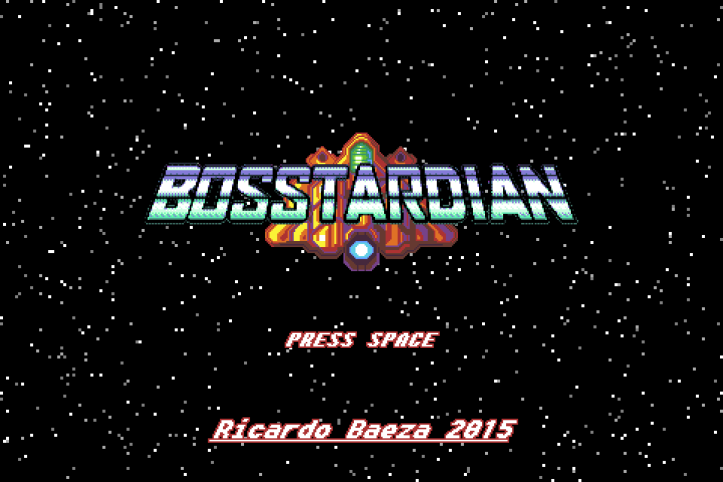 Bosstardian is by Ricardo Baeza, who won the genre prize for shooter games for the 2015 IGMC. The game as it is has two stages with boss fights at the end.

The main gimmick of Bosstardian is collecting the absurd amount of gems that the game throws at you. Blue gems makes your shots stronger and increases your spread on the current life and green gems create shields that get bigger the more you collect (which… I actually kinda consider to not be much of an advantage). Collect 100 pink gems and you get an extra life. Collect enough orange gems and you can go into Bosstardian mode, your ship suddenly morphing into an invincible colossus armed with fully powered shots and spread. It’s one of those cathartic things where you can just tear the shit out of everything. Also, a thing I like is that the gems automatically float toward you, so you’ll never have to stress about catching them.

If you get a game over and choose to continue, you’re presented with two choices: either halve your gems or halve your score. Honestly, halving your number of gems is a slap on the wrist. Unless you get a game over during one of the boss fights, it’s kinda easy to recoup your losses and if you’re the kind of player that aims for highscores, the choice is easy with that in mind. It’s an interesting idea, but the dilemma’s kind of a no-brainer.

I like the look of the game, but I also wish that enemy bullets looked more distinct.  I found that it was hard to distinguish them from the sea of gems you keep pulling in and they could easily hide in them with how small they are. I also found them getting lost in my own shots, which isn’t a concern at low power but grows to be more of an issue as spread increases.

My other issue is that the levels just went on for Too Long and felt kinda tedious to play through. I feel that it was like that so that you could gather more gems, but the game throws enough at you that it makes stretches of the game feel unnecessary. A consequence is that the music, which I thought was just sorta okay, got grating, especially since both levels use the same tune. I will say that they end off with neat bosses, though. I like how they’re just the enemy version of you when you go into Bosstardian mode. Actually, it’s more like that Bosstardian mode is you ascending to the same level as a boss ship; seeing the bosses honestly gave a sort of thematic appreciation for this mechanic.

I feel that Bosstardian is one of those games with interesting ideas that just needs balance and polish. As a game made in a month though, it’s pretty neat. It’s stated to be a demo, so hopefully it might show up again in an improved state? Unfortunately, like Grist of Flies, the game seems to have disappeared, which is a shame.