The world of Soma was once ruled by the Sun King, who became mad with power. The spirits, Form and Dissonance, stepped in to stop him and the resulting conflict led to Soma being split into two realms: the World of Joy and the World of Sorrow. The worlds are looked over by the guardian spirits, Heart and Soul, who are called into action as the balance holding the worlds together begin to shift. 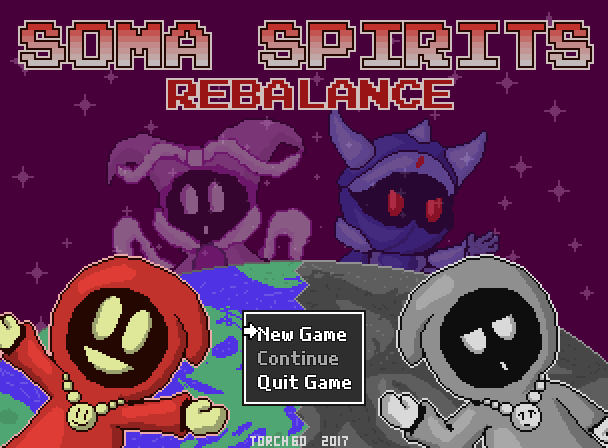 Soma Spirits: Rebalance is an RPG Maker game by Torch60. Rebalance is an expansion of Soma Spirits that’s up for commercial release on Steam for $4.99. However, you can still download the original version of the game for free from over here. It lacks the additions and the refinements that Rebalance has, but it’s still good in its own right. 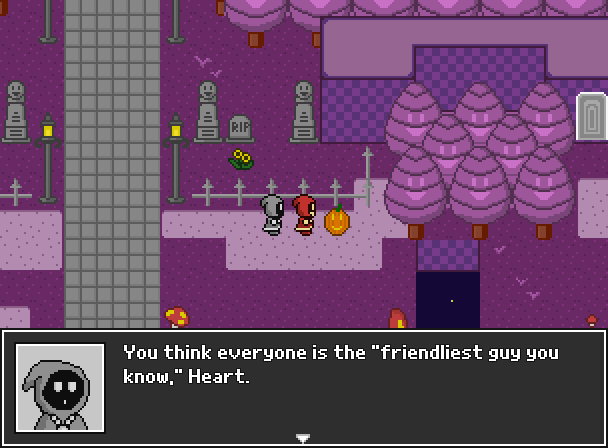 You spend the entire game playing as the cheerful yet oblivious Heart and the easily annoyed yet caring Soul. As the spirits in charge of maintaining Soma, they go on a quest to either shift Soma entirely toward one of the extremes or to maintain the balance. The spirit Form opens up ways to new areas, where they must seek out troubled people to ease their sorrow for the sake of joy – or to take their joy to maintain sorrow.

A thing that I like about the story is how the World of Sorrow and Dissonance – the other spirit that occasionally tries to impede you – is approached. In an ordinary game, Dissonance’s plan to create a world without joy would be seen as downright evil. In fact, just look at the guy on the title screen, his appearance just screams “villain.” While he still kinda is, Soma Spirits treats the existence of the World of Sorrow as something that’s necessary.

While the versions of the people in the World of Sorrow are clearly unhappy, they’re not suffering either. In fact, if there is suffering, that suffering also exists in the World of Joy; the difference being that the World of Sorrow is honest about that suffering while the World of Joy hides it. For instance, Cardboard Bob of the Box World is struggling at his job and wishes to leave, but Joy!Bob keeps those desires hidden. One of the main reasons why Dissonance wants Soma to completely embrace sorrow is that it would be a world that isn’t ignorant of its problems, a world that doesn’t shove its issues under a smile. While Dissonance does have ulterior motives, he does have a point in that a world of complete happiness wouldn’t be great.

It also helps that, in trying to make decisions that would lead to a happy world, that some of the decisions are questionable. In the case of an area threatened to be put under eternal winter, the correct answer is to let the person causing it be. Sure, it may screw up the ecosystem, but you’ll be easing the sorrow of the person causing it, which is good enough. 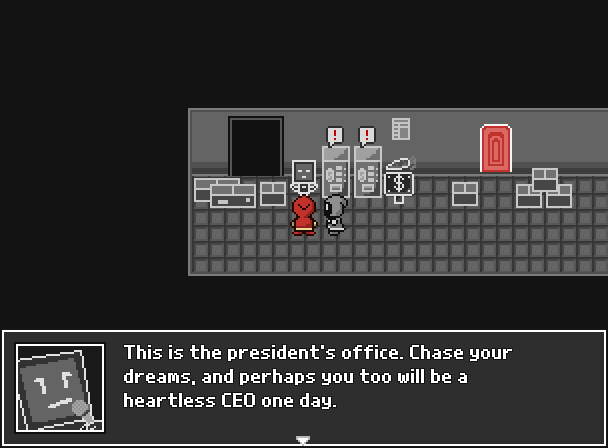 There are other differences between the worlds, aside from their ideals. Heart and Soul can hop between the realms through doorways scattered throughout the dungeon they’re exploring, the colorful and peppy version of a realm with happy faces as decorations swapping out for a somber world with nothing but frowns, and vice-versa. The map lay-outs change, often requiring a swap to another world to get past a roadblock that existed in the other. The dialogue gets swapped too, peppy optimism and good-natured jokes turning into snarky apathy.

The biggest change though lies in the battle system. While there are the standard “Attack,” “Defend,” and “Item,” commands, there are the “Power,” “Support,” and “Spirit” commands. Power moves are offensive moves that directly affect enemies while Support moves are dedicated to assisting the party. However, if a fight is started in the World of Joy, only Heart can use Power moves while Soul can only use Support moves; the reverse is true if a fight is started in the World of Sorrow. Heart and Soul’s movesets are also different, having different supportive buffs through their Support menus and having different elemental Power moves.

(Meanwhile, the Spirit command can be used by both at any time and they have the same moveset, but moves cost SP. You gain 1 SP each turn, so if a fight starts to drag for too long you can pull out some useful moves.) 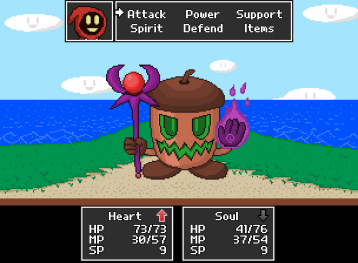 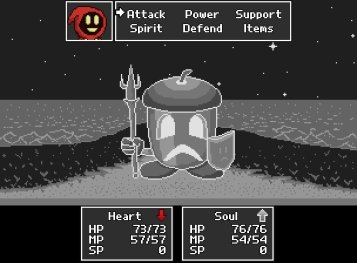 Aside from what Heart and Soul can do, the enemies also change depending on what world you’re in. Their appearances change between worlds and they may have different movesets and resistances. The bosses? They definitely change, their form depending on whether you’re choosing to relieve sorrow or take joy from the dungeon’s main character. These different bosses provide variety if you’re trying to go for another playthrough down a different path. The narrative of Soma’s worlds is nicely tied into the game’s battle system and approaching enemies and fighting bosses requires a change in tactics on your part.

I am mixed on the fact that you only control two characters, though. It does work thematically, but I found having only two characters to be frustrating at times. As there are fewer targets for enemies to gun for, it wouldn’t be hard for the whole enemy team to focus down on one of them. God forbid that only one character is alive and the enemy gets a move off and kills him before you can revive the other. However, I have played another RPG Maker game, LISA: The Pointless, which also mainly follows two characters and I think Soma Spirits handles it way better with the nice variety of skills Heart and Soul are given.

After you beat a boss, you either gain an orb of sorrow to make the world happier or an orb of joy to make it sadder, depending on the route you took. There are multiple endings to the game dependent on whether your overall orb count leans toward joy, sorrow, or neither. As the game’s title suggests, going a balanced route and getting three of each orb is the “true route,” and was the route I went with for my playthrough. After all, while the game does present merits to a world of joy and sorrow, a world with nothing but one of them is also seen as extreme. 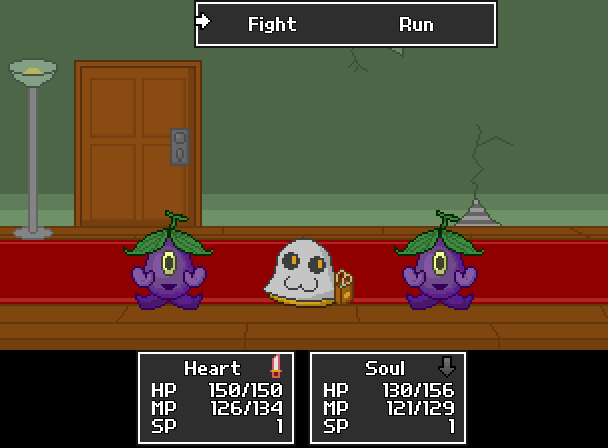 The art of the game is cute and simple, with different color palettes depending on the world. There isn’t really anything here that could be identified as default RPG Maker stuff – it’s all original art by Torch60. Always take a moment to appreciate RPG Maker games like this, where creators establish their own look and style. That said, I’m not too into the visuals of the World of Sorrow. I mean, I guess it makes sense thematically for everything to be grayscale and it creates a strong contrast to the World of Joy, but it’s just kinda boring.

Let’s also take a moment to talk about the music of the game. The music is composed by Special Agent Ape, bringing chiptunes and Banjo-Kazooie stylings to Soma Spirits. Areas, battles and cutscenes have different music depending on whether you’re in the Joy world or Sorrow world and the dungeon music dynamically switches as you pass between worlds. The Joy related soundtracks, as you may expect, are upbeat and peaceful, while the Sorrow tracks are heavier and somewhat more menacing. Personally, I prefer the Joy versions of the cutscene music while I dig the Sorrow versions of the dungeon tracks; the music for the last dungeon on the balanced route is also extremely good and pretty climactic.

I kinda expected that the game’s soundtrack would be sold on the Steam store since it’s original and all, but it’s not? I guess you can listen to the soundtrack at the composer’s YouTube and SoundCloud. But hey, if you want to give money to the composer, consider supporting their Patreon or commissioning them.

Soma Spirits: Rebalance is a game that, I daresay, has a lot of heart and soul put into it. The writing is fun, everything’s cute and the battle system’s nice. It’s another one of those RPG Maker games on Steam that’s a pleasant surprise and I think it’s something worth buying.