A drifter wakes up from a nap in a coffee shop, suddenly feeling ill. As he heads to the restroom, he stumbles upon the body of a dead woman. His sickness is connected to this, as for whatever reason, he can sense whenever somebody nearby dies and he can feel what victims felt in their last moments. In feeling her last moments, he discovers that the woman had not died in a way that the crime scene suggests, which adds to the mystery that begins to unfold. 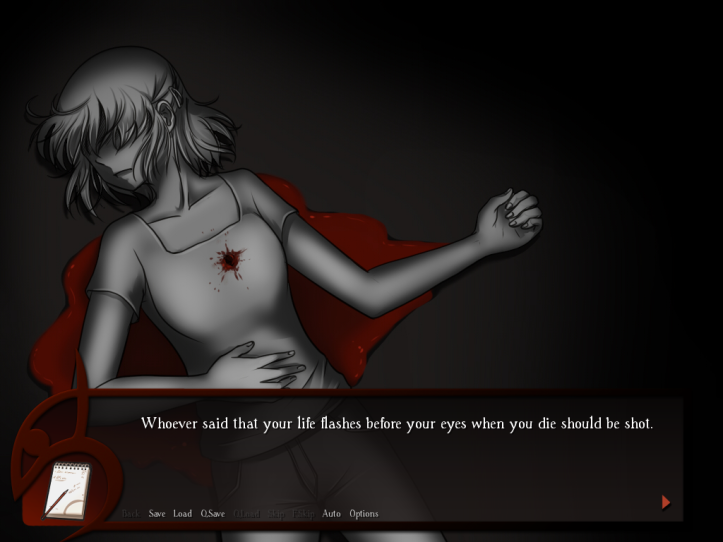 My visual novel kick from playing Zero Escape continues, so I decided to check out one called Jisei. Jisei is published under Sakevisual, the writing by Ayu Sakata, art by M. Beatriz Garcia, music by Marc Conrad Tabula and a bunch of other fellas providing voice work. The game normally goes for an asking price of $9.99. However, the game will be for pay-what-you-want on itch.io (with suggested price of $6.99) for a short period, with all proceeds being donated to efforts in Harvey.

After the body is discovered, everyone is told to stay at the coffee shop by a Detective Gurski until the police formally arrive. In the meantime, the protagonist is stuck as the most likely suspect. I mean, in all fairness, what did he expect? Like yeah buddy, you have the power to feel somebody’s dying moments, but that doesn’t mean you should go around touching dead bodies without telling anyone that there even is one. I’m sure that refusing to tell the investigating detective your name also helps your case, my dude.

But, Detective Gurski is understanding and asks for the protagonist’s cooperation in investigating if he wants to clear his name. And by cooperate, he actually means that the protagonist should do the investigating, since he’s the main character and all. Which is ridiculous, considering that Gurski’s introductory scene has him establishing himself as an extremely competent detective; why he just takes a backseat while you give all the questions makes no damn sense to me.

You spend much of the game consulting Detective Gurski and gathering information from the other characters. There’s the barista Chance, college boy Kizaki and working woman Miss Bergstrom. You get information from them and report back to the detective, the detective suggests how to follow up on that, you get more information and so-on. As the story progresses, like any proper mystery, everyone starts to seem more suspicious with no solid alibi and possible motives revealing themselves. There’s even a bad ending that you can get at a certain dialogue option that will really mislead you – this bad ending is also properly explained in the game’s epilogue, so it’s a good red herring without it being wildly out of place.

A thing that bothers me about the story is how it treats the more supernatural aspects of it. The story doesn’t dwell too much on the protagonist’s powers, only being given brief mentions after the beginning of the game. For a power that’s followed him for much of his life and part of the game’s very premise, you’d expect more information about it. Given the ending, it feels like something that’d be covered in the sequel, Kansei, but leaving the nature of the protagonist’s power up to a sequel hook leaves a lot to be desired.

In fact, I would say that a lot of the visual novel feels incomplete. You don’t learn too much about the other characters aside from what they reveal in exposition and there isn’t really any flavor text outside of your railroaded questioning. You don’t even know enough about you, because aside from the supernatural stuff, there’s very little details on the protagonist. You don’t even learn his name, which is kinda ridiculous.

That leads me to the game’s most glaring flaw: it’s just too short. The game’s about an hour long – and that’s if you’re listening to all the voice acting. Normally, I’m not too finicky about the price-time investment ratio for games. However, that’s usually because I usually find the short amount of time spent satisfying. As I said, I found the story to be lacking, which makes the game’s shortness feel like much more of a problem. If it were longer, I’d imagine that the story would be more fleshed out.

What I don’t have a problem with is the art. The character portraits look nice and I appreciate that they’re distinct from each other. Kizaki’s personally my favorite, but then again, I’m biased for nervous boys. While there aren’t a lot of backgrounds, they generally look nice and I appreciate the detail that goes into them. I especially love the coffee shop, it just looks so nice and welcoming – it really makes me want to enjoy a nice cup. The game generally has a very bright and colorful look that’s nice to look at, though some would argue that the looks aren’t befitting of a murder mystery; I would argue back that the story doesn’t have the tension to necessitate a darker look, as the story even acknowledges that the characters are in no further danger after the body was found.

I’m kinda mixed about the game’s voice work. I generally considered the voice acting alright, with Chance’s as my favorite while the mysterious voice that comes to the protagonist’s aid is my least favorite. My problem with the voice acting mainly lies in delivery. There are moments when characters are acting careful and hesitant, but they deliver their lines faster than you’d expect their behavior to indicate; a lot of delivery feels rather brisk, actually. Again though, the voices themselves were generally okay and you know, after I’ve played a bunch of games with full of known voice actors, it’s nice to hear voices from fresh talent.

The game’s accompanied by some music, much of it very piano-focused, with one track of unsettling ambient noise that’s appropriately used for scenes dealing with the body. I wouldn’t say that the soundtrack is memorable, but it creates a nice atmosphere for your investigations. It really does add to the presentation of the game, helping establish the presentation as the game’s strongest suit.

The presentation of Jisei? Pretty good. The story? Ehh. And that’s not really something I should be “ehh” about. I get the feeling that a lot of unanswered stuff is answered in Jisei‘s sequels, but there isn’t enough content to act as a sufficient hook to see those answers. Maybe the sequels improve in this area? I don’t know. I normally try to be positive on this blog, but in spite of the game’s presentation, I’d have to give Jisei a pass.