Dr. Darley and the Case of the Deboned Children

I’ve spent the last month of my summer trying to get through the last two Zero Escape games: Virtue’s Last Reward and Zero Time Dilemma. If you’re into visual novels or want to get into them, I really recommend getting into this series – like, check out that Nonary Games collection. Forget Danganronpa, this shit is more my speed. I’d like to talk more about Zero Escape, but given the scope of this blog, I cannot, as niche Japanese releases don’t count as indie games. Life is simply unfair. However, it has gotten me on a visual novel kick so I decided to look at a short visual novel that found its way on itch.io’s front page. 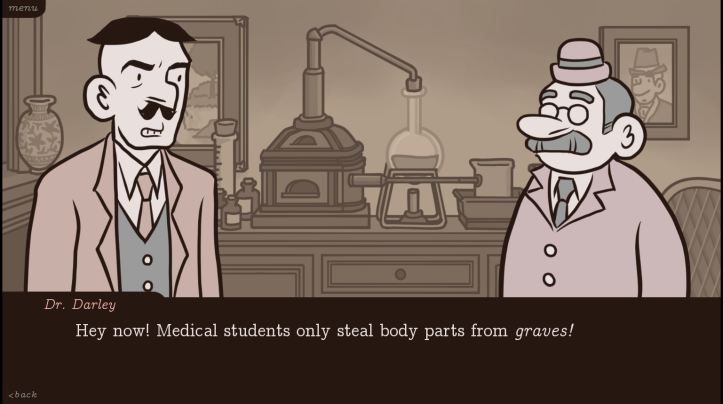 Dr. Darley and the Case of the Deboned Children is a visual novel by Lars Martinson, an artist known for the graphic novel series Tonoharu. It’s billed as a sort of crossover between Sherlock Holmes and Grimm Fairy Tales, or at least, a crossover of their general ideas. This game is sort of a prototype, a step into the pool of making visual novels.

A Holmes-esque Dr. Darley and Watson counterpart Mr. Homain head to the mining town of Pelso, on a doctor’s call to check on the son of Mayor Cunderfore. To the shock of Dr. Darley, he finds that the bones in the boy’s arm has disappeared. In fact, he’s not the only victim – the children of the entire town have been losing their bones. What seems like an epidemic turns into a mystery as the setting takes a turn for the supernatural.

Going into Dr. Darley, you shouldn’t be expecting a straight laced mystery. The game kinda does that thing where the culprit is somebody that hasn’t been seen until the reveal, which is iffy for mysteries if we’re going by Knox’s Ten Commandments. In fact, if we’re going by that, the culprit being supernatural (I mean come on, that’s not a spoiler – but the exact cause is) is also a violation. That’s not to mention the bizarre leaps of logic Darley makes to justify the motives behind said supernatural cause.

But, being a crossover with Grimm Fairy Tales, some suspension of disbelief is welcome. In fact, it’d be better off if you view Dr. Darley as a general story rather than as a mystery to be solved. As a story, Dr. Darley is entertaining, the mystery aspects giving it intrigue and fantasy elements keeping things unique. There’s also a lot of humor, as the story isn’t afraid to not take itself too seriously. A lot of it comes from Darley, who, while wise and well-intentioned, really doesn’t understand stuff that is considered normal. The story even wraps up in a way that I did not expect – even knowing the fairy tale angle – which is a great thing. 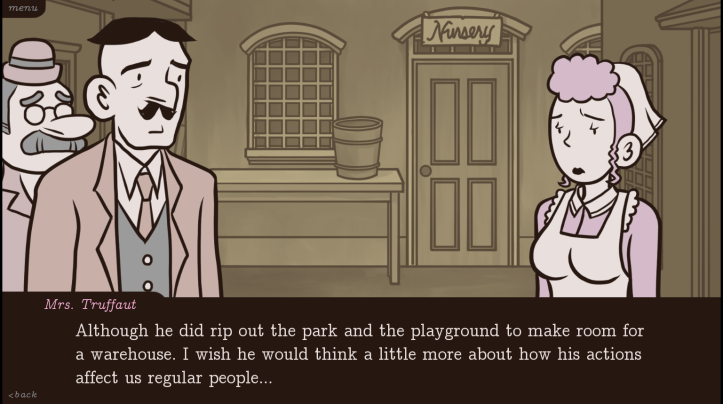 The art of the game is nice and clean, as you would expect from a cartoonist. The character designs avoid being samey and the backgrounds set the scene nicely. The game’s color palette adds to the Victorian mystery feel of the story, while not being too muted, inviting the occasional lighthearted shifts (usually through humor). It also does well in communicating Dr. Darley‘s small bits of horror – this is a story revolving around children without bones, after all.

The biggest problem of Dr. Darley, one that you would notice immediately and something the author acknowledges himself, is the complete lack of sound. Visual novels give that audio-visual quality to a reading experience and with no audio, the experience feels empty. Granted, the creator makes graphic novels, not music, and he was operating under a short timeframe as well. If this story were to be updated in the future though, audio stuff is an absolute must. If the need for music is a big requirement for you to read this, itch.io user RexTGun suggests some jazzy easy listening.

Dr. Darley and the Case of the Deboned Children‘s a nice story, though one that lacks a fundamental aspect of visual novels. It’s about the length of a short story, being around 10,000 words long, so it doesn’t take long to read through. There are hints that there could be more Dr. Darley stories, both in the story and the fact that the URL is “darley01.” If more ever does come to fruition, I’d be interested to read them (though hopefully with audio).