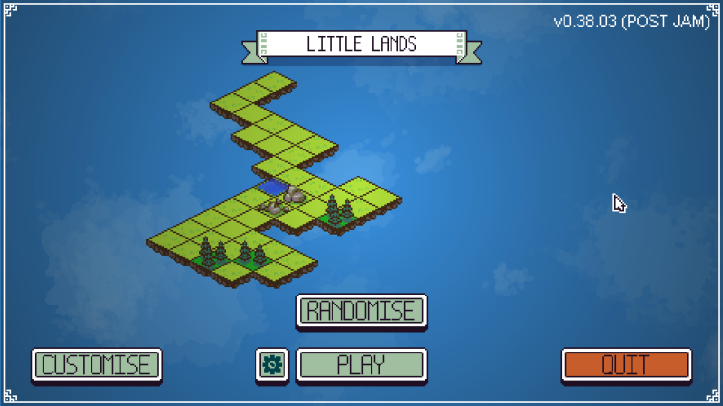 I’ve previously wrote about something for Ludum Dare 38, which was Bureaucratic Deity Simulator 2018. The theme of this jam was “A Small World,” which a lot of people seem to have interpreted to mean basing a game around building up a small world. Today, I revisited this jam, this time with Little Lands.

Little Lands is by Robin Field, delivering a small city-building strategy game to the plate. The game centers around floating tiles of land, which slowly pulls in more tiles of land into its orbit as time passes, with the ultimate goal of getting out of there.

First things first, you have to place down a town hall and a shipyard. To sail off into the void, you have to invest 300 of each of the game’s three resources into the shipyard: food, wood and rock. Of course, you’re going to have to also use those resources to place down buildings to produce said resources. You’d also be stuck building homes to increase the number of workers available to produce these resources, which means that you’d have to produce more food. After a certain amount of time, your food resources get deducted based on your current population; if you don’t have enough food, the percentage of happiness will go down based on the poor people that didn’t get any. Reaching 0% happiness is a game over, but as long as you stay on top of the food game and appease your citizens with walls, you’re good.

Not all is peaceful in Little Lands, as sky pirate ships start flying in to terrorize you for no real reason. Ships will arrive at one of the four sides of the map and start blasting away at a nearby tile, eventually destroying it. If a ship starts blasting your shipyard, you’ll begin losing the resources you put into it, which obviously isn’t good. While the situations never happened to me, I imagine that them blowing up homes would bring down your population and that the destruction of the town hall would spell game over. To counter this, you can build towers your citizens can shoot from to ward them off.

However, the pirate ships weren’t too much of an issue for me. Placing towers at all sides  makes for a decent defense, even without the barracks upgrade. Sure, the pirates could destroy pieces of land before you take them out, but as long as you aren’t building things toward the edge, it’s a non-issue.

But hey, without the pirates to worry about, you could focus on some city building. Granted, there isn’t really variety in the homes that you could build, but the dev does encourage having as many citizens as possible for when you finish your ship (on the game’s itch.io discussion board), so you can consider that a challenge where the enemies are not. You can also customize the speed of resources, pirate attacks, etc as a form of difficulty modifier. 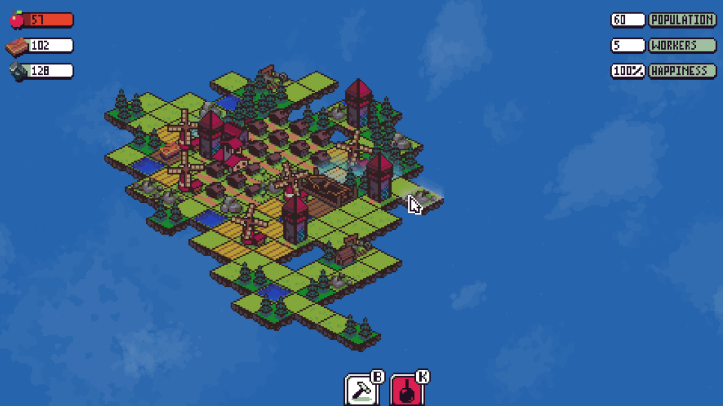 Something that I’m definitely not conflicted on is Little Lands‘ presentation. The graphics for the game makes me think of a nice cute little board game, with all these different pieces fitting on the squares. The music, by Billy Hobson, is pretty good. The main theme is relaxing, while having this adventurous feel that feels appropriate for the occasional bouts of combat. After a whole session of listening to that and building up your ship, you’re treated to a chippy victory theme that makes flying off feel more accomplishing.

While I wanted to see more from the strategy side, Little Lands is still nice to play as a city-builder. For what’s there, the whole experience is wrapped in a nice package, especially for something made in such a short timespan.  By the look of things, the devs are planning on making a commercial version of the game with more complex things. If it’s along the lines of the planned possible features on the game’s page and then some, it’d be a release I’d look forward to.