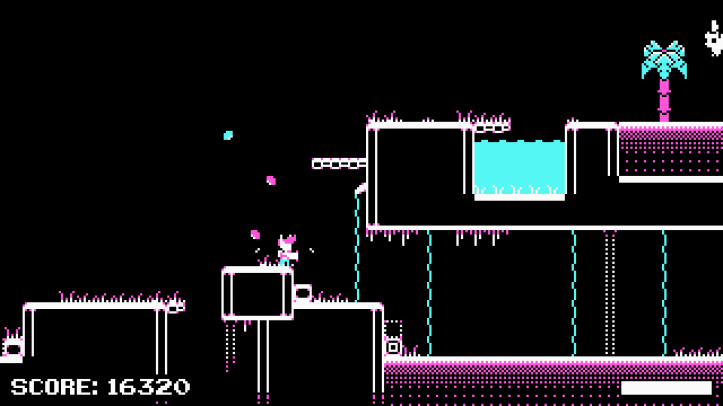 The CGA Jam happened a little bit ago, demanding participants to make a game with a limited palette. Most of the games ended up using this light blue, pink, black and white palette, which is my shit. Coming in first place for the jam was SCANLINE by rxi, which is what I ended up looking at.

SCANLINE is a score attack platformer where you’re chased by a wave of pink scanlines, devouring the world around you as you run to the exit portal. Why? Who cares? Who needs context for a purely arcade experience?

You carry a nifty gun to deal with enemies and propel yourself to higher ground. Shooting is controlled by a recharging bar, so you’d have to be wary when facing down a bunch of enemies and when you need to blast yourself to higher ground. I like this mechanic because it sort of keeps you from just cheesing the game by spamming fire over and over.

The levels are procedurally generated, with each advancing level seeming to introduce new setpieces to go through. You start out with three lives and die with one hit; though, you can get an extra life for every 10000 points you get, either through killing enemies, breaking jars and getting the gems inside, or simply clearing the level. I say that the game is generally fair, but then there are the bat enemies. Dealing with one bat is easy enough, but they’re a nuisance when multiple bats spawn, especially when you aren’t on a good elevation to properly deal with them. Such is procedural generation.

Aesthetically, the game is real pleasing. The palette dictated for the jam is used effectively and I like the simple details. The tufts of grass, the bits of ground with pink dithering and their accompanying palm trees, the occasional butterflies, it’s all real neat. There’s only one song for the game, but it’s pretty good. The sound effects accompanying your running and gunning fits nicely and helps the experience.

Overall, I think SCANLINE is a good game worth checking out. It’s pay-what-you-want, so you can totally play it for free – though it’d be nice to throw the dev some money!