The Cheshire Cat appears before you, making snide comments and mocking you as you go. “Alice,” he keeps calling you, as he does to everyone, because all people are the same to him. You dismiss his nonsense and he disappears, with the inevitable promise of coming back to harass you later. You turn your focus to the doors before you and they beckon you to delve into the dreams of their occupants. 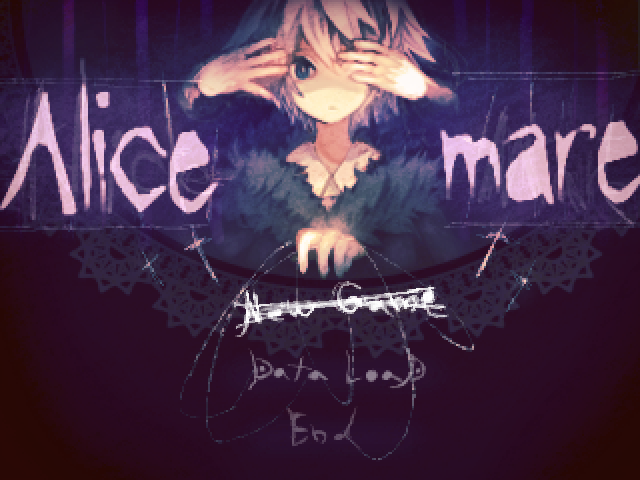 Alice mare is a game made in Wolf RPG Maker, made by Miwashiba, translated by vgperson. I previously played Miwashiba’s LiEat games, which I thought were okay adventure games with a charming style. If the dates for the original freeware games on Vector is accurate, Alice mare was actually made before the LiEat games, so I tried going into this without preconceptions from playing them.

You play as a boy named Allen, the recent resident of an orphanage run by a man that goes by Teacher. Allen is a blank protagonist, quiet, having lost his memory; all the kids have lost something, really. One night Allen finds himself beckoned into an alternate world ruled by a White Rabbit and a Cheshire Cat, the latter of which acting as a hostile trickster. This world connects to the dream worlds of the other kids, revealing their backstories in abstract and sometimes frightening ways, with the only way to escape being to explore the worlds and get the keys within. 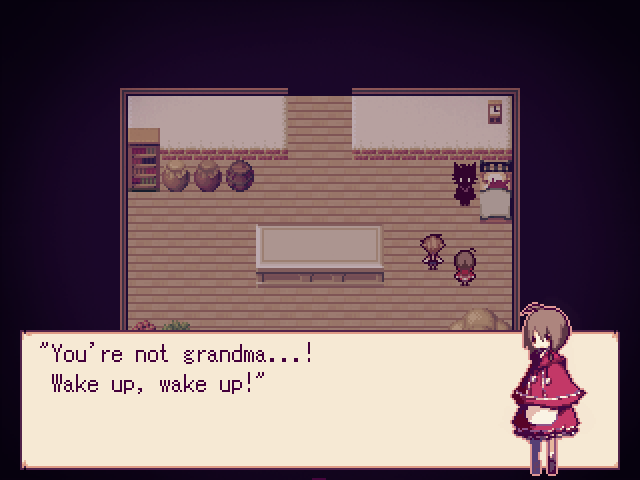 If the title and the names of the characters of this realm doesn’t clue you in, Alice mare draws from fairy tales for its story, with the backstories for most of the other characters being based on them. While there are some horror elements in the game, the interpretations of these stories don’t lean too far into the grimdark “fairytale but FUCKED UP” aesthetic that I feel is overdone; in fact, even though the story is dark in some areas, the true ending of the game is ultimately hopeful, if bittersweet. As for the interpretations of these stories, I think Letty and Joshua’s worlds are my favorite, having interesting takes on the stories they’re based on; on a personal note, I kinda relate to Joshua’s whole deal.

I’m not saying that Alice mare should tell everything to you – in fact, I appreciate that the game’s true ending is a sort of open-ended thing, but that thing up in spoilers was something I’d have liked to know more about.

Alice mare‘s gameplay is pretty standard adventure game stuff, with you walking around and solving puzzles to advance. Most of the puzzles are pretty basic and not that hard. The only sore spot I had was the fourth world, Stella’s, which was pretty much mostly mazes that didn’t even look cool and a part where you’re just blindly checking graves for items without any indication they’re there. Otherwise, all standard.

There’s also a Tetris- I’m sorry, NuTetris – minigame that works alright, though not as smooth as the actual thing. Also, gotta say, having a goofy NPC show up to offer you a Tetris minigame kinda breaks the atmosphere. 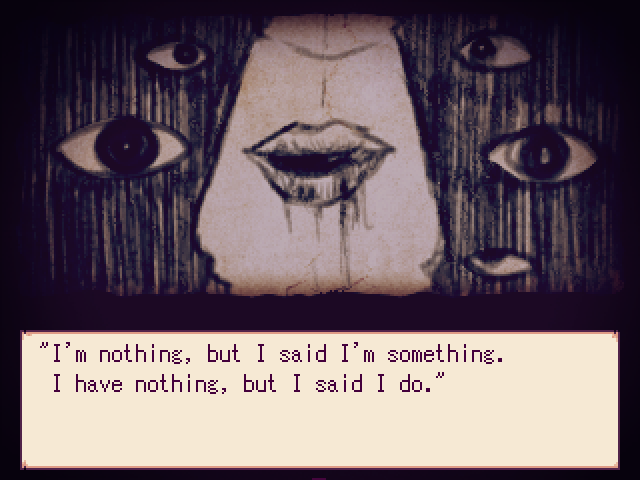 The art of the game is pretty nice, with the weakest aspect for me being the mapping. The cute character sprites are contrasted with their more detailed dialogue portraits, with different expressions as well as sprite changes for story events. Outside of Alice mare‘s sprite work, the game also uses pen drawings for the journal pages that tells the characters’ backstories and for the credit sequences, which I really love because they give this aesthetic of a storybook that’s not quite right.

The game’s music adds to the storybook feel with a mix of music box-like tunes and slow remixes of old public domain songs. The exception to this is the Cheshire Cat’s theme, which is harsh and dramatic to reflect the menacing mood. My favorite track though is the credits theme, which is a piano melody with a bittersweet feeling, which is rather fitting for the game’s endings.

It was interesting to play this game after LiEat. Alice mare feels like it sets up the backbone of those games, with Miwashiba getting more stylistic with the art and introducing cutscenes, growing comfortable enough with the engine to introduce a battle system (even though I honestly found it unnecessary). If I were to compare the two, while I liked LiEat more in general, I liked Alice mare more as a concrete experience, as Alice mare tries to tell its main story over one game instead of three. 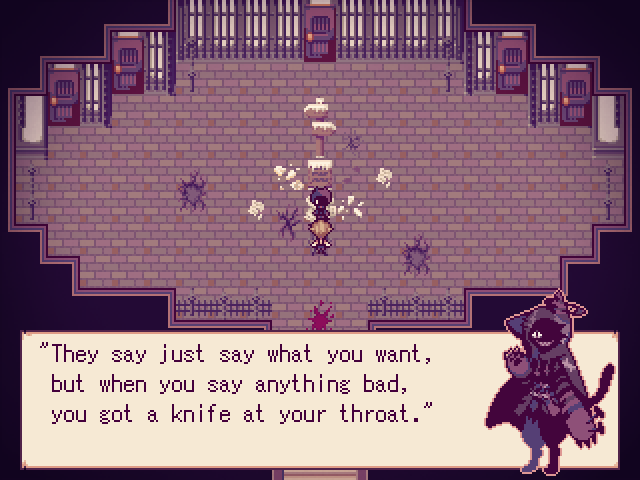 Alice mare is a really short, standard adventure game that’s dressed up in a storybook aesthetic with a dream world that tells some interesting interpretations of fairy tales. No matter where I go, I always end up playing these games about exploring dream worlds, huh?  It’s not high quality and there’s definitely a story aspect I wish they could have delved into, but still, a good time, and for $2.99, you can’t complain too much. Of course, you could always hunt down the original freeware version of the game, but I’m all about supporting developers here. Alice mare apparently has an official novel made by the creator, so maybe that could resolve my issues? I don’t know, but vgperson’s also made an unofficial translation of that, so if you’re interested in Alice mare, maybe check out as well.