Running out of Space – a few Ludum Dare 42 games

It’s that time of the year again, it’s Ludum Dare baby!! The latest Ludum Dare, which ran from August 10 to 13, had the theme of “running out of space,” which I thought left a lot of room for interpretation. So, I checked out a bunch of games and here are a few that stuck with me!

You know how Sephiroth had that really cool Supernova move that blasted through the entire solar system, only to do negligible damage? Edgy Fantasy Battle Deluxe, by Yanrishatum, Zeusdex, Theodote, and Shess, is what happens when moves like that actually had consequences!

The entire game has endgame JRPG protagonists facing off a “villain,” using devastating limit break like magic to fuck her shit up. To do this, you have to sacrifice land tiles to perform your feats of destruction. The game is sort of half puzzle game, with you choosing batches of land to sacrifice and you have to make efficient decisions, lest you’re unable to get a patch to sacrifice and have to make do with your (comparatively far weaker) normal attacks.

The game is an interesting idea and I like the models, they’re very reminiscent of an early PS1 RPG. I think that if the team ever returned to this idea, they could use more varied battlefields or maybe even randomized battlefields for your party to draw magic from. 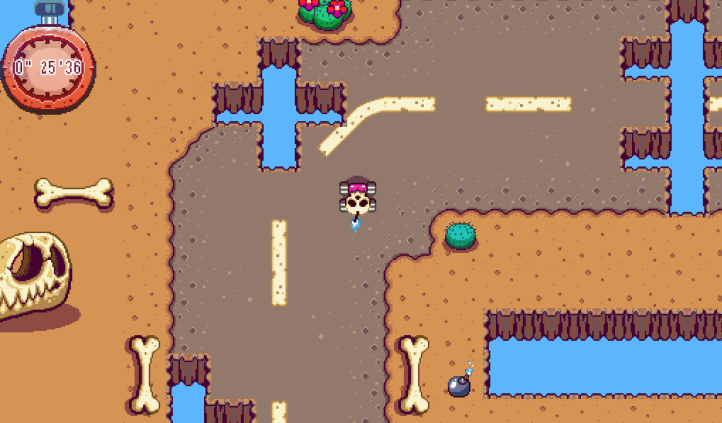 TrackBlasters, by  Noojsan, Kokonaught and My Sweet Whomp, has you driving around a racetrack for the best time. The catch is that for some reason your car likes to leave bombs behind as it goes, blowing Bomberman patterns into the track that you could fall into on the next lap. The game thus becomes about careful driving, trying to go as fast as you can while navigating to ensure that you still have space to drive through on your next go-around.

I mean, you could always drive off-road so that bombs could explode harmlessly away from the main track, but where’s the fun in that?

It’s a simple and neat idea, though it’s a bit frustrating that the game sets your respawn point far from where you fall. Though, given that you’re destroying the land as you play, I understand how it’d be hard to account for spawn points.

The Flesh Pit is a game brought to us by FrankieSmileShow. I previously looked at A Growing Adventure, his entry for Ludum Dare 39 that I really liked and after missing his last few Ludum Dare stuff, I was excited to hop into this one.

You are fighting for the glory of the Flesh God and it demands meat! This is a score-attack game where you fight waves of enemies to accumulate their meat. However, the meat isn’t just shoved into some hyperspace inventory, but it manifests physically, enemies exploding into chunks of flesh, propelling you around and making the arena claustrophobic. It’s kinda nauseating if you think about it. Given the backing sound, this would probably be a horror game if it weren’t for the grotesque silliness/cuteness of the enemy designs.

I think the game needs some polish, because I feel that knockback is too small (to the point that using knives feels like a liability) and jumping feels iffy, but what’s there is pretty cool and I appreciate that there’s different weapon types and I like the enemy designs, even if they’re not fully detailed.

TINY TOWNS is a city building puzzle game by Bearish. You are given limited space, urging you to make the most of the room given to you to build a town that fulfills all of the objectives.

Like all puzzle games, it starts out easy. Sure, just gotta plop the garbage dump and electric plant over here and put all these houses and trees there, easy. But then the objectives just get more demanding. Put down all these houses? Got it. Oh, they’re too close to the power plant? Okay, let’s plant some trees and – oh jeez, there’s no more room for road. It’s all simple, but the game tries to run with the most it can with its rules.

Out of the Ludum Dare 42 games I looked at, this one might be my favorite. It’s polished, aesthetically pleasing, doesn’t really have major flaws and it keeps throwing puzzles at you. Definitely a must play. 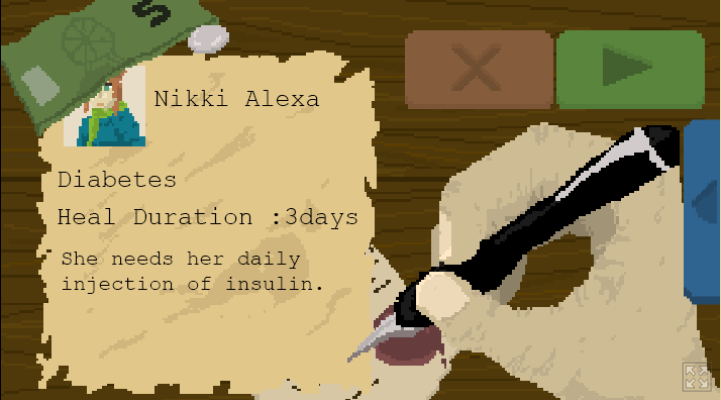 You May Live is by AnlaXix, Draigius, and SachaY, mixing management game with moral dilemmas. You are the chief doctor of a field hospital low on supplies during the midst of a war and you have limited space for patients, either because of lack of beds or because lack of funds to accept more.

Patient requests come in, with a brief description on how long they’re going to stay and whatever funds they bring. You can expect the moral dilemma of “person is heavily injured but has nothing to offer,” but you can also expect getting random assholes that you probably wouldn’t want to serve but hey, they have money on them.

I feel that the game being so quick to play through kinda mitigates whatever emotional impact it has. Like, some comments compare this to Papers Please, but the game lacks those long stretches of time for the impact of your decisions to set in or the hoops that you have to go through to make a confirmation or denial that makes your decision feel more important. For me it’s one of those things that couldn’t reach its full potential on account of a time limit, but you know what, I still appreciate what it was trying to go for.

There is Never Enough Space

There Is Never Enough Space is by Jamie Rollo, who decided to tackle the subject of the jam through multiple minigames. Navigate through this space! Fit things into this confined space!

If your microgame busting are excellent, the game will be very brief, but it’s a sweet time, and as a WarioWare appreciator, it’s always good to see games like this. Cute art, fun times, no complaints from me.

Owned By is a visual game poem by etrohar and arctic_allosaurus. You roam around a metaphorical mindscape while a voice demands that you accept your role in life. Aside from the close shave chases from manifestations of judgement, the jam’s theme is embodied by the idea of being restricted by society into fitting a certain role, which is an interesting narrative take on the theme.

The sketchy art style lends an interesting atmosphere. Getting caught by the mindscape’s manifestations gives you a lovely scene of a horrible eye opening up and staring at you, with more eyes staring you down for every time you’re caught, which is, well, actually kinda creepy. Sure, the gameplay is simple, but, it’s one of those games where the game part is a vehicle for everything else, if that makes sense.

That is only a mere handful of games made for the jam. In fact, there were 3066 submissions for this jam between the main game jam and the compo, which is just wild to me. Of course, there’s plenty of time to check out games beyond the mere handful I’m presenting to you, as the rating period ends September 4, so check those out and remember to give some votes to the games you enjoyed!