I talk about RPG Maker games a lot on this blog and I’ve spent a lot of personal time on those, but the other type of game I’ve spent lots of time on are roguelikes. More specifically, those twin-stick roguelike shooters. Well, you’d probably call them “roguelites,” but man, I’m not getting into that terminology argument.

There’s an addictive appeal to these games and their action means that they don’t have the slowness of a lot more traditional roguelikes. According to my Steam, I’ve spent almost 300 hours on Nuclear Throne, probably 50 on Enter the Gungeon (between Steam and PS4) and 200 on The Binding of Isaac; there’s a lot of things about the latter that frustrate me, but the fact that I ended up spending so much time on that anyway is a testament to how much I get into these games.

So, it’s no surprise that I picked up Monolith, which is also a twin-stick roguelike; more specifically, it’s the dungeon crawling type where you advance room to room. The game is by Team D-13, who describes themselves as a trio of roguelike and shoot em’ up appreciators, their love of the genres uniting into this game.

The game takes place in some vaguely apocalyptic setting, where a mysterious facility that’s known to have “power eternal” suddenly opens up. Your little ship heads straight on over to claim power eternal for itself. I’m not sure if there’s a pilot in the ship, the pause screen and dialogue kinda implies that the ship has a mind of its own. Besides, there’s a talking cat as a shopkeeper, so let’s just roll with it.

Your ship goes around random dungeon layouts, with your typical shops and item rooms thrown in, fighting enemies to harvest debris to use as money. To reach the boss, you have to hunt down a set number of minibosses on the level to unlock it. Pretty simple structure. 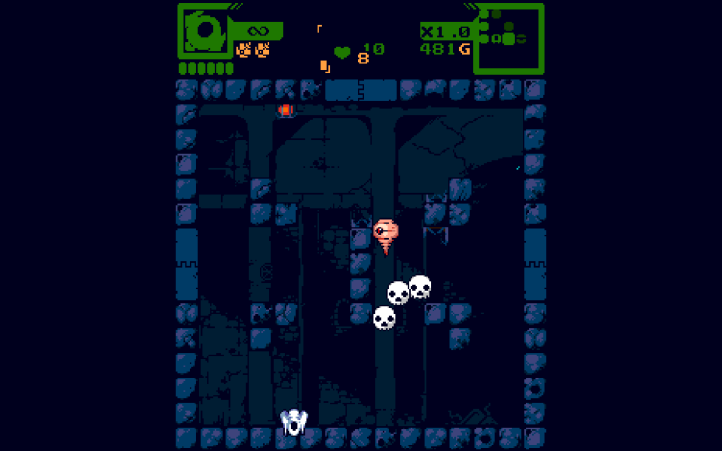 Your default gun kinda sucks though, but thankfully, you can pick up different weapons. Weapons don’t necessarily cause more damage, rather, they change how you do damage (with actual damage upgrades found as separate items). You can get a screen-crossing laser beam weapon, a simple yet tough revolver, etc. These weapons come with a randomized assortment of modifiers, like modifiers that can make your weapon fire in threes, turn them into homing shots or make them do extra damage to certain enemy types, whatever. You can get the mid-range Vulcan firing like a shotgun, or you can get triple lasers that can phase through walls like horrible death rays. Depending on modifiers, ammo count changes accordingly, and if you run out, you’re back to your lousy gun. You can use your accumulated debris to buy new weapons and modifiers from that cat at the start of the dungeon, so there’s a nice variety of things to play around with.

I like how Monolith approaches weapons because it feels balanced, on top of the weapons being generally fun to use. Like honestly, the only reason why I found myself ditching weapons is if another one offered modifiers I liked (or had more of them) or to get some health back, because I felt that I could go through the game just fine with any of them. The hardest one for me to get used to was an unlockable sword weapon, which is, uh, a sword in a bullet hell. But, once I knew how to use it and to get around bullet patterns, using it is ridiculously satisfying.

Difficulty wise, it feels hard, yet merciful, because I felt that the game was more generous with pick-ups than its contemporaries. Some rooms were annoying to get through, like this room where half of it is being fired on by indestructible turrets and the other half by the miniboss, but a lot of them felt like fair challenges. Overall, I feel that it’s more welcoming compared to other games. Monolith only really spikes in difficulty with Sanctum and its multiple-phase boss, Overlord, ending things off with a good fight.

The next paragraphs are going to be in spoiler territory, so they’ll be put through rot13; just copy-paste the garbled paragraphs through there if you don’t mind the spoilers.

After beating all that, you unlock the game’s hard mode (I mean this isn’t really a spoiler, you’d expect a hard mode at some point). The enemies and bosses change up their attack patterns and the final boss gets changed. As far as I can tell, debris collection and items drops seems to be the same, so there doesn’t seem to be any artificial difficulty bullshit, just more stuff to learn, which is good. There are some other modes to unlock and while I haven’t managed to get them in the time I spent on the game, they sound like significant changes that helps spice the game up.

Now, a thing that I really like about Monolith is that sessions are quick. The small size of the rooms means that they’re quick to run through and you won’t be spending time running around a map to look for one last enemy to advance. Like, if a room takes more than half a minute to clear, you’re probably doing something wrong. I’d say that an average playthrough would be about half an hour. Compare to Isaac, where 30 minutes is the speedrun time to meet to fight a bonus boss – even if you didn’t meet those conditions, there’s still two more floors after that point. If you just want to play something real quick, Monolith‘s there for you.

The game’s art style is clearly going for an old-school aesthetic. In fact, there’s a CRT filter in the options if you want to go all in on that. I can get if people might get turned off by it because of over-saturation of the style, but I feel that Monolith can get away with it because it’s done well. It all looks nice and hey, bright projectiles on top of dark backgrounds is forever a good thing.

I expect roguelikes like this to have good music so that my endless replays don’t get bogged down by boring noise and I think that Monolith delivers. My favorite level theme in the game is actually the theme that plays on the hard mode version of the first level. It has this triumphant mood to it that feels very welcoming, as if inviting you to say “I’m back,” after you ate shit and died. I also love the pause screen music that plays on the first few floors; it’s monotonous, but it has a jaunty vibe that I can’t help but love.

My only big issue with the game is actually sorta minor, and it’s the fact that achievements seem to be bugged? I brought this up in Steam’s discussion forum and other people seem to be having trouble with it too – mainly people that just got the game. The game’s still good, but people that really get into achievements will probably be annoyed by this (at least until it’s fixed).

[EDIT 2/10: This actually got fixed a few days after I posted this; gonna have to replay the game a bit, but yeah that’s an issue you no longer have to worry about.]

Monolith is a good time and I definitely recommend it, especially at it’s fair default price of $7.99. Twin-stick roguelike fans would be at home with this and since I feel that the game’s fairer than others, it might be a good way to get into the genre, especially with how fast-paced sessions are. As this is Team D-13’s first game, it leaves a damn good first impression and I look forward to whatever the team puts out in the future.