Happy New Year! I’ve decided for once to take on a New Year’s resolution and my resolution for this year is to get through my backlog of games. I think that it’s a reasonable goal and hey, I can write about some of that stuff for this blog. So, let’s ring in the New Year with the first game I decided to get out of the way, Helen’s Mysterious Castle. 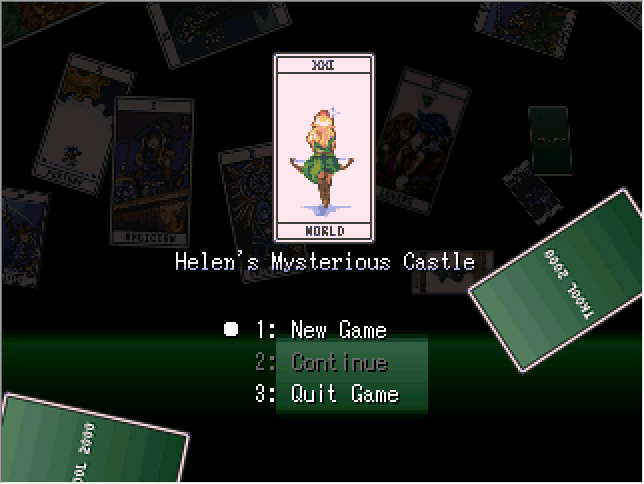 Helen’s Mysterious Castle is a game made by a developer named Satsu, published and translated under Japanese indie game publisher PLAYISM. Helen, our silent protagonist, lives in the eponymous castle, holed up on a high floor with her brother, Ardin.  She also wants to leave the castle all of a sudden, so it goes.

The story is in a weird place for me, because I sort of found it to be a rollercoaster with regards to quality. The game starts out with Helen standing outside her house and Ardin’s there, all like, “hey don’t go to the ruins to the North.” It’s not even in a cutscene either, you can just straight up ignore him and walk there yourself. There isn’t any context, you’re just thrown in there, which is something that is typically seen in first time RPG Maker games made by hobbyists and not something you should see in, uh, a paid product. It gives a bad first impression, especially since you don’t learn motivations or anything about the setting until after the first few bosses. What do you know about your character at the start? She’s sort of a silent protagonist, speaking only in “?” and “!” that other characters somehow understand and she initially can’t read.

Then there’s the mid-point of the game, where it becomes a jokey RPG where you also learn more about Helen and the setting of the game. To descend further, Helen must face down the Demon King and his minions occupying the 3rd floor of the castle, who are an affable bunch that likes to play around. They even have gimmicks and have dungeon segments and their battles themed around it, which I thought was nice. Looking back, this part of the game, when it wasn’t taking itself so seriously, was probably my high point.

Then after that, the game does try to take itself more seriously, introducing villains that aren’t joking around. However, I feel that it doesn’t do as good of a job as it could have done. I’ll bring this back up in a bit, but I’ll also say that the last leg of the game is actually kinda bad.

For the most part, the story wasn’t really captivating to me, so the game’s main draw for me was the battle system. It’s sort of a turn-based battle system where you don’t have any stats on your own, but your weapons do: Effect (basically Attack), Defense and Wait. You and your opponent choose a weapon to use and the Wait stat counts down until it’s used at 0. Until it does, you take on the weapon’s defense stat. You beat down the enemy and you get EXP, which you use to level up your weapons to improve their stats.

Gameplay revolves around learning what’s in an enemy’s moveset and the wait times for their moves so that you can plan yours around it. For instance, magic weapons are powerful and can ignore defense, but you have no defense while casting it and the wait time is long; you would then either have to time the use of that weapon or use other weapons to manipulate the enemy’s wait counter to get off a move before they can.

I think this battle system is neat, especially considering that you only play as one character. I usually consider RPGs where you only control one character boring, but Helen’s Mysterious Castle gives its protagonist a bunch of tools to work with and gives a system that requires strategically making the most of them, which keeps it interesting. I will say that normal enemy battles eventually turn into “just spam X” affairs in the mid-game (if you’ve been diligent about upgrading), but the boss battles remain as interesting duels up through the end. 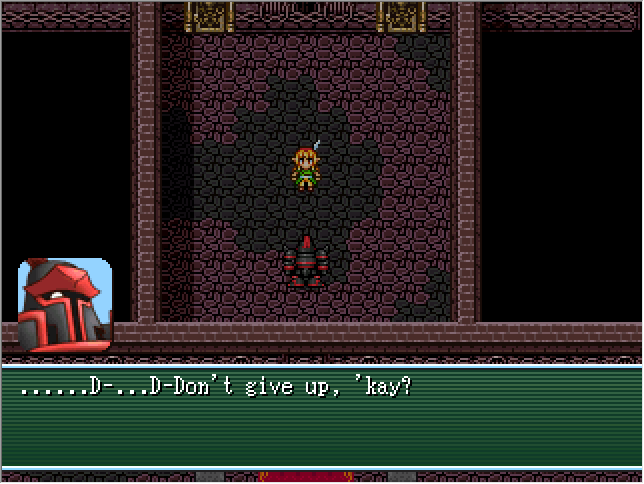 When it comes to the general aesthetics of the game, it’s pretty much the standard fantasy SNES RPG. In fact, as RPG Maker 2000/2003 encourages people to pursue that aesthetic with its default assets, Helen’s Mysterious Castle directly uses some of the assets or remakes them to better fit in with the game’s own custom art, which is extensively used for battles. Like for instance, that sick Undead Knight is a default engine asset, but Helen’s Mysterious Castle gives it a few touch ups and animations.

I know that some people are kinda negative on the use of default RPG Maker stuff. In fact, I was doing those Steam Winter Sale explore queues to satisfy my craving of trading cards and I saw a whole bunch of RPG Maker games on the platform that wholeheartedly uses the default art and I thought, “yeah, this kinda sucks actually.” The thing is, a lot of them weren’t doing a good job at it. Like honestly, my problem with the use of default RPG Maker stuff isn’t the fact that it’s being used, it’s the fact that most who do use them don’t use them well. Helen’s Mysterious Castle, for the most part, uses these assets well and it helps that it’s mixed in with its own stuff. Personally, the game’s aesthetic is boring to me, but I’ll still say that it’s done alright. Music feels like generic SNES RPG music, but it’s not bad at all.

However, my boredom with the aesthetics as well as the story not really winning me over left me feeling “ehh” about Helen’s Mysterious Castle. Even if I did dig the game’s style, the story had issues and lost opportunities, especially the ending. It’s a short game, so I won’t dig into the ending here, but I thought it was really unsatisfying. One of the main issues is that the final villain is just some guy that pops up in the final stretch instead of any of the bad guys you already know. It’s got Naruto Kaguya energy, to me.

Helen’s Mysterious Castle is normally $1.99 and my playthrough lasted about 6 hours, which I think is a fair value, if you’re interested. At best… Helen’s Mysterious Castle is just okay. The battle system is neat, but there wasn’t much else that wowed me. It’s not a must buy, but if you’re itching for a short RPG and aren’t willing to bother looking through the copious freeware RPG Maker games out there, this is a thing. If you’re the type of person that wants a satisfying conclusion to their games though, I don’t think you should bother.