First off, I’d like to thank my friend Trick for getting me Momodora: Reverie Under the Moonlight last Christmas. Secondly, I’d also like to apologize to Trick for only having played it for like an hour as we drift closer and closer to another Christmas. You know, backlogs and shit.

I’ve thought about maybe going back to that, since I need some non-RPG Maker content for this month. But then I thought, “hm, don’t I also have Momodora III?” And I do! And then I got to thinking, “how were the first two games like, actually?” And so, I continue putting off the new Momodora to look at where the series started.

The Momodora games are by Bombservice, led by rdein. The first two games are available for pay-what-you-want rdein’s itch.io, so they’re easily accessible.

Let’s start off with the first Momadora game, released in 2010. When I went to download it, the itch.io page advised that it was pretty rough and paled in comparison to its sequels and recommended that I play those instead. But you know, even if it’s rough, it’s always nice to revisit something’s roots. You can really see how a developer grows looking at their early stuff and working their way up.

In the land of Koho, where maidens waste their lives away in rituals, a daughter of a deceased one named Isadora heads into a cursed land to look for something that could revive her. This land is dangerous since it’s a video game, but Isadora comes armed with a giant leaf to use as a melee weapon and she can find some quality guns in the ruins, because of course they’re there.

I typically hear that the later Momodora games are Metroidvanias and I kinda saw that in the short time I played Reverie in the Moonlight. It’s not something that I see in this game, however. Progression through the game’s areas are pretty linear, separated by the game’s few save points. You’re occasionally presented with a different path, but they’re also linear paths that just take you to one of the game’s collectibles instead of acting as an alternate route. Surely, these collectibles actually do something, right? …Actually no. Nothing changes in the game if you collect all of this stuff, so them and the sidepaths leading to them are just bragging rights more than anything, which is kinda disappointing.

There is no equivalent to a heart container either, so you’re stuck with five hearts the whole game. Is there anything meaningful to collect? Well, there’s weapons and tools. You can pick up guns to use in place of your leaf along with a handy boomerang and shield generator as side tools. In theory, the gun variety would be neat, but by the end, you’ll likely only use two guns: the powerful Colt gun that outclasses almost all the others in every way and the missile launcher, which, while weak, can home onto enemies so you can kill everything that’s not in the Colt’s line of sight. This area could have taken more thought, for sure, since you don’t have a reason to use the other weapons once you get these. The tools though are pretty useful, so there’s that I guess.

Momodora I is sort of a cruel game. There’s no way to recover your hitpoints besides touching one of those diamond crystals, which you usually only find in between areas; you can also find them when going down one of the side paths, which I just consider as an apology for wasting your time going down them in the first place. The first few areas are pretty fair, but the last two areas feel like gauntlets with the amount of nonsense it throws at you. And of course, dying sends you back to the save point before the area, which is real fun, yeah. Not gonna lie, it’s pretty frustrating. 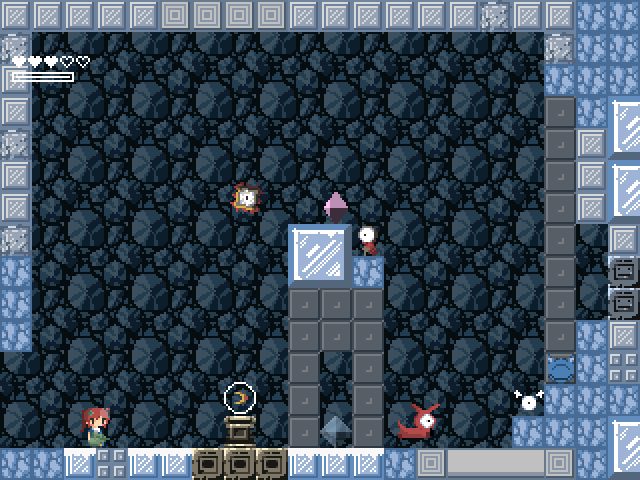 Momodora takes inspiration from a bunch of games, but its strongest influence definitely has to be Cave Story. In fact, the game’s visual style is pretty reminiscent of Cave Story‘s original style. It made me briefly wonder if the environmental tiles and stuff were recolors or edits – which they didn’t seem to be, but I feel that if you showed screens of this game to somebody that’s heard of Cave Story but not Momodora, they’d think that it’s a fangame or something. I generally liked the look of the game, though I sometimes got confused about what tiles were actual ground or part of the background layers, which got kinda annoying.

The game ends with an actual boss fight, so it at least goes out climatically. Isadora faces down the Underworld Queen, Lamia, and upon beating her… oh, I guess she fucked up. 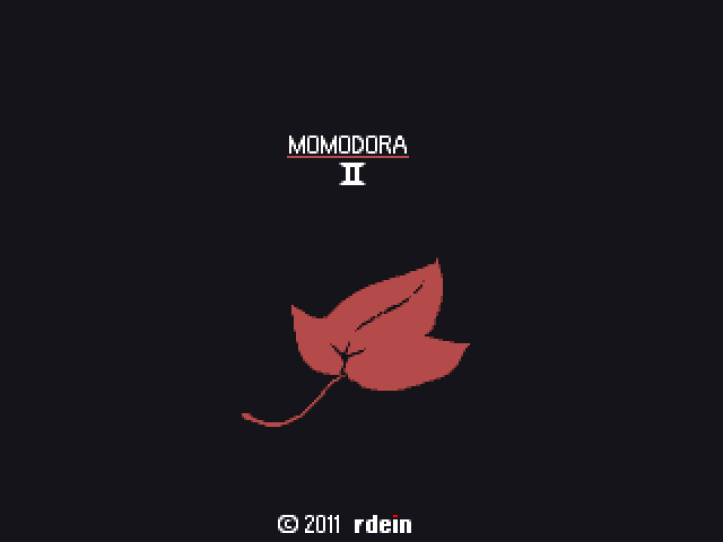 And so, we move into Momodora II, released in 2011. Momodora II‘s story follows directly from the previous one, which turns out to not only have been a waste of Isadora’s time, but she gets cursed into becoming a new Underworld Queen for all her trouble. She starts terrorizing nearby villages, so a shrine maiden named Momo sets out to put her down.

The first improvement Momodora II has over its predecessor can be seen immediately after starting the game: save files! You do save in the first Momodora game, but you only have the one file. Speaking of which, the save points in the game have changed from generic diamond things to little shrines where you ring the bell to save, which is fitting for the character and it shows signs of the franchise developing its own personality from its inspirations.

In fact, Momodora II adds character on top of the groundwork the previous game laid out. The previous game was just these bunch of caves with no real story until the end; the intro cutscene was also apparently patched in a few months after release, so it was probably either an afterthought or put in preparation for this game. Now, there’s other characters you can talk to with their own goals and there’s some vague semblance of background lore (I’m pretty sure one of the statues you can pray to is the protagonist of Reverie Under the Moonlight?). The writing’s kinda simple, but it’s still more effort than the previous game. The areas of the game also feel more distinct from each other, with all sorts of different details and enemies setting them apart. Rahart Hall’s probably my favorite area, being this opulent mansion like area that really stands apart from the rest of the game.

Going further, this is the game that embraces the series’ Metroidvania aspects. As opposed to the first game’s linear paths with a linear divergence that gives an item that’s bragging rights, the paths and rooms in this game are more interconnected. There are clear paths present for when you eventually backtrack through areas and you can find chests hidden off the beaten path that upgrades your health. You’re also going to have to poke around a bit to find the item that gives you the game’s true ending. There’s also this locked black chest you can find, but apparently it’s a Chrono Trigger joke, that shit’s not opening. 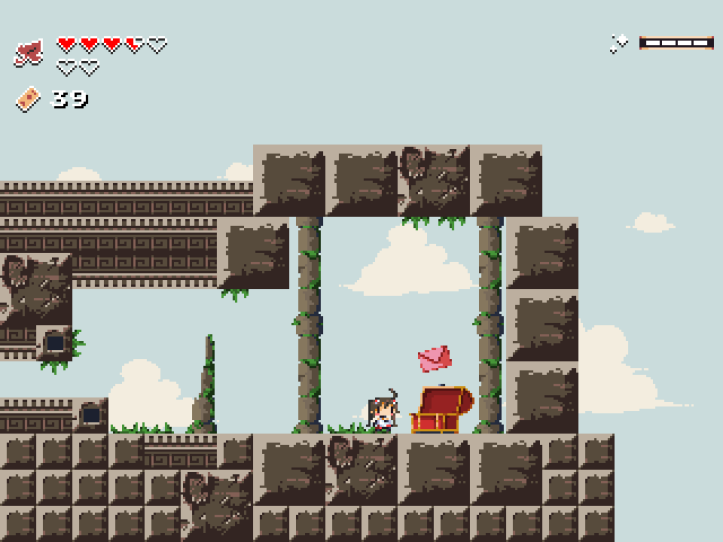 Momo does not collect the arsenal of weapons Isadora gets. She gets slips that she can use as projectiles while the rest of her upgrades are movement based stuff, like the ability to double-jump and short dashes that helps her get to previously inaccessible areas. I definitely prefer this over the original game’s upgrades, because it compliments the game’s exploration aspects and as I said before, most of the weapons in the first game ended up being pretty useless.

Difficulty-wise, Momodora II is actually easier than its predecessor. With heart containers to collect and the fact that enemies can actually drop health, the levels aren’t hard to deal with – except maybe for the last stretch before the final boss. The bosses picks up that slack, with hard hitting attacks and patterns to memorize. I will complain that the final boss’ dumb energy tennis orb attack does too much damage if you mess up, but besides that, I feel that the fights are fair as soon as you pick up on their tells. Definitely more welcoming to players than the previous game.

Another thing that II improves on is the look of the game. There’s a lot more details in the environment and it looks and feels way less like a Cave Story-like. If I had an issue, it’s that in some areas, it’s still kinda hard to tell foreground and background apart; happened way less than it did with the previous game, but still an issue. While we’re comparing, I also like the soundtrack for this game more, because it feels more smoother and it feels like there’s more variance than the first game’s soundtrack.

Honestly, this section of the article can just be summarized into “Momodora II improves on the first game in every way.” It’s the ideal sequel, a game building on its predecessor’s strengths and going in new directions.

Looking at these games, I feel that Momodora II is the entry where the series starts. The first game may have laid the groundwork, but the second built the foundations on top of it. Not to mention that Momodora II’s just the better game. The first Momodora is frustrating, but it’s a serviceable action platformer. However, with the improvements that Momodora II piles on, it’d be hard to justify going back to that one.

I played through both games in sessions, swapping between them so that I can better compare and contrast. There’s something satisfying about seeing how the second game improves on its predecessor. I can definitely agree with the first game’s disclaimer of being rough, but playing it showed me how the Momodora team grew in making these games.