And so, after a month of some IGMC 2015 games, let’s have a month of looking at 2017 ones! Hopefully, now that To Crime Nirvana done (nudge nudge), Indie Hell Zone updates will be a lot more frequent. 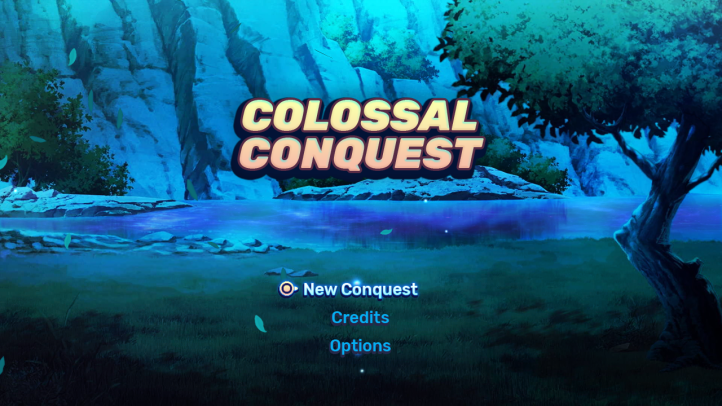 Colossal Conquest is by Swift Illusion (also known as Midnight Tinkering) and is made in RPG Maker MV. It’s a boss game, where gameplay is focused on the boss battles. Currently, not counting the tutorial, there’s only one conquest to play.

So, I really recommend to play the tutorial first if you’re going to play this game, because there’s a whole bunch of mechanics to pay attention to. First off, there’s the stance system that your characters and your enemies can inflict on themselves that acts as a rock-paper-scissors system; though, instead of the usual “attacks of this type are stronger against this type” kind of gameplay, it’s the critical hit rates that are affected, and critical hits are surprisingly common to inflict, so the stance system is important to pay attention to. Your enemies also buff themselves alongside inflicting stances on themselves, so you have to pay attention to their statuses to consider which ones are the most important to take down. Your move list is surprisingly verbose, the advanced ones offering special effects that work in certain conditions.

Bosses also run on a “boss mindset” system that you can pay attention to. This determines when the boss attacks or summons enemies. You can’t strike at the boss while its flunkies are out and about, though killing enemies is the only way to generate spirit meter (the meter that uses those blue orbs in the screenshot below), so it’s not all that bad. Now, the game suggests that you pay attention to the boss’ mindset and then act accordingly, but honestly? I kinda didn’t understand it and how it changes, so I just kinda ignored it; honestly, I feel that if I had been paying attention to it, it wouldn’t have made much of a difference in my playthrough.

An aspect that I really like about the gameplay is the risk and reward elements. The only way to heal in the game is by spending some of the spirit meter; however, you also need that spirit meter to learn new, more useful attacks in the middle of battle, so maybe you’d risk not healing to get them. Even after learning those moves, there’s still the temptation to keep your health low, as some of the moves have an additional effect that only kicks in when the percentage of your health is lower than your enemy’s.

Then again, by healing a character, you can also put a buff or restore EP of another, which is tempting in itself. I really got to hand it to the creator, I’m surprised by the complexity of the battle system and the choices it offers. The overall art style of the game is sort of clashes, though I recognize that the creator was more focused on the game’s battle system and making the game work. As other RPG Maker hobbyists may recognize, the bright animated enemies are the works of Ækashics. As for the characters, they’re made by an artist called Woestijn. While their art style clashes with Ækashic’s, I really dig the character art. I love how distinct the characters are from each other, it makes them feel unique and gives the feeling of them being some ragtag gang going out to fight monsters. My only complaint with the character art? The “Swordsman” wields an axe and the wrong naming bothers me on an emotional level.

The overall gameplay of Colossal Conquest is pretty neat once you figure everything out, though, I do feel that more should be done with the boss mindset or the boss’ moves to make players more likely to pay attention to it. Heck, maybe add skills that’d affect boss mindset; like skills to calm it down when it gets pissed and starts summoning stronger flunkies, that’d be neat. Still though, the system that’s there is interesting and more engaging than a lot of standard RPG Maker battle systems and I’d like to see more of it.