IGMC 2017 has ended, which means that this site will go back to its normal schedule. Grasshoppermask and I released our game, To Crime Nirvana, and while I doubt that we’ll win anything, we had a fun time making this. If you’re interested, check that out!

But enough about me! To start off November, we’ll look at one last game from IGMC 2015 before I maybe start looking at IGMC 2017 stuff? That might be conflict of interest, I dunno, but anyway:

ZIZ is a sci-fi adventure game made by nerdvsgame. It’s made in RPG Maker VX Ace and it was the winner of the adventure genre.

A woman named Motoko awakens on the research ship Ziz, an unknown disaster calling her to the ship’s bridge. To assist her, she turns on a maintenance android, who dubs himself Seven as he quickly develops sentience. It’s very much one of those, “can robots be people?” stories, told rather quickly within the constraints of the game jam.

The game’s theme is actually expressed in a neat way toward the end. At one point, you’re controlling Seven and you’re presented with dialogue options. However, you don’t actually get to choose what he says. Symbolizing his growing sentience and independence, he automatically chooses what he wants with no input from you. It’s also him that decides which of the two endings you’ll get, which depends on how you treated him during your playthrough. It’s a simple but neat way to express the idea of robot sentience.

Gameplay has you controlling Motoko and Seven, with the ability to split them up and switch between them. The most basic use for them is to split them up so that they can simultaneously turn on separate panels to proceed. Seven gets a later mechanic, capable of moving through electrical fields that Motoko can’t pass through. 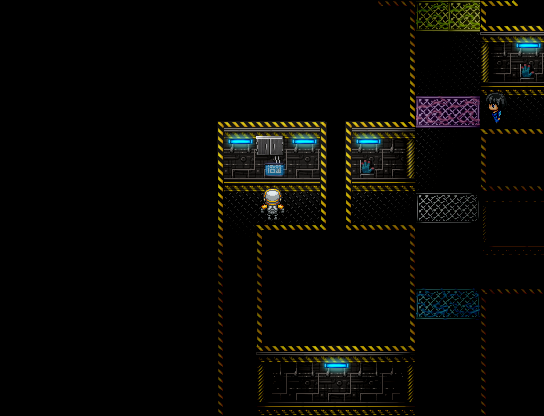 The game’s puzzles? They’re just okay. Some puzzles felt arbitrary but they weren’t annoying, either. My favorite is probably the one in the screenshot above, where you’re switching around electric fields so that Motoko can get around safely, which makes the most use out of the character switching mechanic. For the most part though, the puzzles didn’t wow me nor did they have a sense of personality to them. I feel that without the sci-fi aesthetics, this stuff could easily be pushed into a different setting and context. It’s not bad, but it doesn’t stand out, either.

On the game’s aesthetics, it’s pretty nice, clean, sci-fi stuff. ZIZ has a nice look to it and I appreciate the ambient “spacey” music that follows for most of the game. The strongest, most unique part of the game’s aesthetics shows up when the ship’s AI speaks. Instead of just being a text box, a computerized voice speaks out its lines. While this isn’t the case for its extended conversation toward the end of the game, hearing the AI voice out actions while you’re doing things kinda gave an immersive feel to the game.

Overall, ZIZ was pretty okay, if pretty standard for adventure games made in RPG Maker. I kinda feel that it’s one of those things that could have better set itself apart and have more to if if it wasn’t a game jam. While lacking, the game still managed to tell the story it wanted to tell and its aesthetics were pretty on point, so that’s something to appreciate.