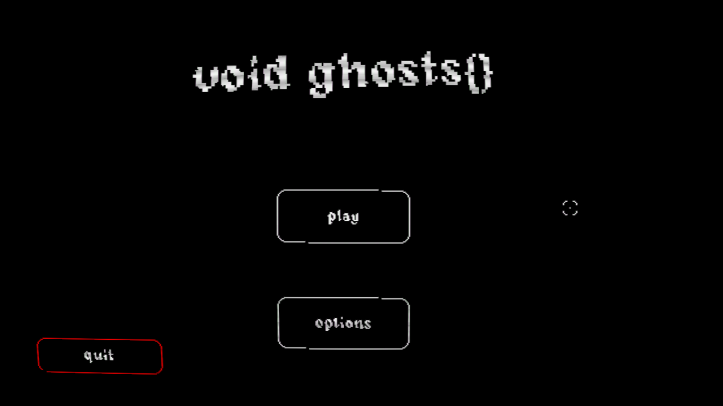 void ghosts{} is a score-attack shooter game by “like, a hundred bears.” Unfortunately, it can only be played on PC – sorry Mac and Linux people, but I appreciate that you checked in.

You play as a colored animal thing running around a black-and-white maze, blasting away at enemies. There are only a few enemy types in the game, but the game makes up for it by escalating the number of enemies as you blaze through the levels. The levels are randomly-generated, with you progressing after clearing the level of enemies. A handy pointer arrow rotates around your character to show where the nearest enemy is, which will help if you’re scrambling around to look for the last enemy.

The game plays nice and the shooting’s alright; at the very least, I can definitely say that any deaths I had were completely my fault and not of the game’s. The game will also have mercy and enemies will sometimes drop health, as well as alternate weapons with limited ammo. The shotgun weapons feel satisfying to use, especially as the arenas get more crowded with enemies as the game goes on. There was some lag on my end when I used them, but I’m not sure if it was a problem with the game or my computer – there isn’t really any other gameplay footage out there, so I can’t really validate that.

I also dig the game’s simple aesthetics. No clutter to distract from the action, no other colors to get lost in. I feel that the enemies stand out enough from the background, though I understand if people would prefer if the enemies also had different one-bit color schemes to help stand out better. Also, even though the music wasn’t made by the dev (proper credits on the itch.io page), it’s still pretty nice and didn’t really wear me down.

My biggest concern with void ghosts{} is that it doesn’t seem to keep track of your scores, which is something that feels like a must for a score-attack game. Then again, the game was made in a short time frame (according to the description) and for what’s there, the game’s pretty solid.

Here’s a short video of the game if you want to see it in motion. Of course, you should check the game out yourself!