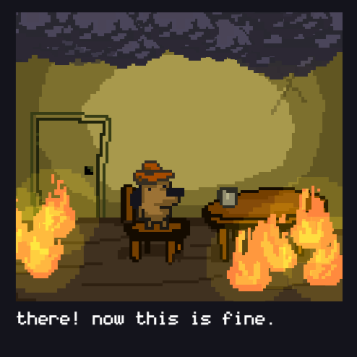 We all know those KC Green comics, right? We all know that one with the cute dog in a hat saying “this is fine” to a disastrous fire, right? That comic’s been used as a response meme to a bunch of stuff that happened in the past few years and KC Green gave it a depressing revisit after the 2016 election. Shortly after said election, some fellow named Nick Kaman also decided to say “this is fine” and made a short game based on it.

In Kaman’s short game, you play as this legendary dog as the fires rage on in his home. What does the dog do? Will he continue to sit in apathy and let the flames consume him like in the original comic? Or will he put out the fire and sit in despair after letting this disaster go on for too long?

In this case, the dog does neither. A fire extinguisher that shoots hearts and good vibes drops from the sky as a soft peaceful melody plays. You try to put out the fires, but one ember remains – the dog doesn’t let that get him down, however. It’s manageable. This is fine. Suddenly, there’s somebody at the door. A bunch of animal friends have arrived to hang out with the dog. The cat’s brought along marshmallows to turn that fire into something good while the frog’s brought their own coping tool of a smoking pipe. The bird friend seems to be on fire, but the dog can rain down some love on them to put them out.

The dog is fine. His friends are fine. The camera pans out to show that the outside world isn’t exactly ideal, but people make the best of it, kids playing around in the snow as other fires rage in the distance.

In the end, everything’s fine if you have friends to rely on, no matter how bad it gets.