Continuing on with my quest to clear through my “A Good Bundle” stuff, I found something that I heard a lot about. Something controversial – not as controversial as Gone Home, but it follows similar gameplay trappings.

Proteus is a game by Ed Key and David Kanaga of Twisted Tree, though people would argue that it’s not a game at all. Advertised as an “ambient exploration game,” you walk around a randomly generated land without much of a narrative. To me, it seems like kind of the ultimate “walking simulator” game.

You find yourself out on the ocean, the island blurred out on the horizon. The waves make gentle noise as you make your way toward it.

The title screen and the journey toward the shore quickly makes the game’s biggest strength apparent: the sound design. The music in this game is hypnotic and it certainly pulled me into the experience. The music changes based on where you are as well as the game’s current season. Initially the music is soft, the sound of waves sort of overpowering it, but it begins to swell as you head toward the shore, throwing yourself into the world. Some sort of electronic accordion fills the ears as you approach standing structures, flowers chime as you get near. Layers of music is stripped away and added as you change elevation, giving this adventurous sense as you scale up a hill. Sometimes I just stop at an area where the music configuration’s real good and spend a few minutes standing there to listen.

The island is bright and vibrant, sprites and objects detailed just enough to indicate what they are. The world does experience some change with a day and night cycle, as well as a seasonal one. I walked into the world when it’s spring, with lush trees and green hills. Eventually during my walk on the island, I found these will o’ wisp type lights, all swirling to this point, acting as a guide toward a glowing white circle. I stepped into it and looked up at the sky as time accelerated, rapidly changing from day to night, stars zipping past. Suddenly, it was summer instead of spring, the color of the grass changing, the sun becoming a bright orange.

There is a goal in a traditional sense, as the game comes to an end in winter. However, the game doesn’t demand that you rush through the seasons, not demanding that you run during a relaxing stroll. Take your time, enjoy the island.

Animals of different sorts depending on the season can occasionally be found across the island, reacting to you as you walk by – though, you can’t interact with them yourself. Frogs hop around, a chiming noise accompanying each hop with a high-pitched one accompanying a large leap. I passed by a cloud of bees, buzzing furiously and suddenly the speed of the player character is increased as it became apparent that I’m running away from a bunch of angry bees. Eventually, the buzzing fades away, my walking speed going back to the leisurely stroll.

I live in a desert, specifically in a metropolitan area, so nature walks isn’t really a thing for me. I think my real life circumstances is part of my enjoyment of this game. Like oh boy, I enjoy walking around in the desert heat where there’s always the sound of cars and there’s dirt and shit. Complete garbage. But hey, here’s this game where I can pretend I’m on a walk on a grassy island. Feels good.

It was also nice to go around and take pictures. Like normally I just pick a few pictures to put in an article but it was hard to just pick a few, so here’s a bunch:

Your player character’s eyes will eventually close, either because you’ve reached the ending or because you decide to hold down escape. Hold all the way and the view of the island is gone, replaced by a blackness that fades back to the title screen. From there, you could choose to head back in at the shallow waters around another island if you want to explore some more, or you can simply leave from there, walking away with the experience.

So, a burning question revolves around Proteus: is it a game? What exactly defines a game? Detractors go on to declare Proteus to not be a game because of its limited interactivity. To me, I think that interacting with some imagined space with some takeaway, regardless of the extent of how you can interact with it, qualifies it as a game. Even if you’re just walking around, you’re walking around in a different world and you’re taking away a sense of satisfaction – at least, if you’re fine with these types of games. Does that make sense? I’m sure that there’s a more rambly, philosophical way to argue about Proteus being a game, but I’m hardly a scholar. 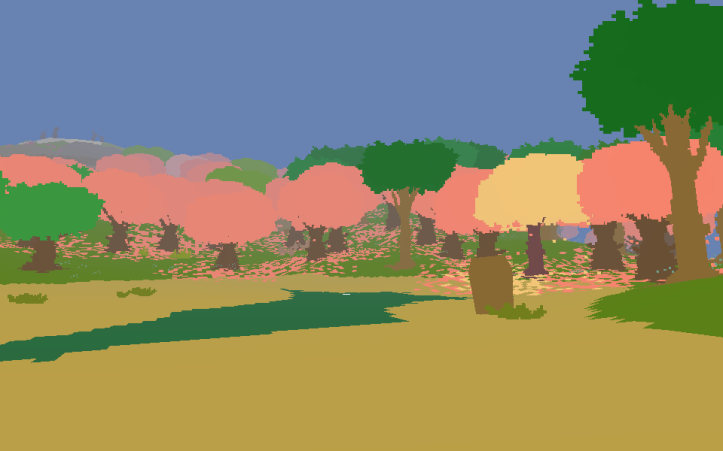 Now, I have a more specific question that may be more relevant from a practical standpoint: is Proteus worth the money? I got Proteus for free from a bundle, but on its own, it costs $10. $10 may be a ridiculous price, especially for people that already balk at walking simulator type games. For the crowd that hates these walking games, Proteus definitely isn’t for them, especially since the game lacks some sort of narrative that would keep the experience engaging. The randomly generated islands could provide replay value, but because of the limited interaction, the only things that’d really change is the stuff you’d get to look at, which could be fine for you but I’m sure that’d turn some people off. As for people that have no problem with these kinds of games, it’s all up to you to decide if $10 is worth a relaxing stroll with nice music.