Despite being somebody that’s really into the RPG Maker scene, the whole phase of horror games made in the engine passed me by. I am a really squeamish person, so I mostly stayed away from this stuff. The only things that I’ve played were Yume Nikki games (which, I argue, is only sometimes horror in nature), OFF (which people for some reason categorize it as horror) and Ib (actual horror game whose aesthetics and story I like) while the rest sorta bled into me like osmosis. Anyway, horror RPG is a dumb genre name since the horror element seems to be loosely defined and I also see people categorize Undertale as that and like. Come on.

So, Ao Oni, it’s a pretty defining game for horror RPGs and one of the most notable games of that genre. The only things I definitely knew about Ao Oni beforehand is that you spend the game being chased around by some blue asshole and that PewDiePie played it and turned said blue asshole into a rape joke meme. This guy. What a hero.

So anyway, I hadn’t played it so now was a better time than any.

Ao Oni is a game made in RPG Maker XP by noprops, released in November 2008, with the English version translated by Jmu. The main premise is just kinda standard horror fare, with a bunch of kids heading to a mansion rumored to have some monster and oh no, the monster is real.

The game doesn’t really have much of a personality to speak of. The setting is real simple and while later RPG horror games has a better focus on characters, the characters in this game aren’t interesting, so I’m not even going to bother remembering their names. It’s one of those horror things where the monster takes front and center and drives the personality behind the game. So, let’s talk about this monster.

The appearance of the Oni being scary or not is debatable. Its appearance is off-putting to some, but to others, jeez, look at that weird blue head on that small puppet body. I honestly got used to its appearance more than anything. The Oni’s pathfinding is surprisingly okay, at many times positioning itself so that it’d cut me off if I need to change directions. There are two ways of getting rid of this thing: wait for a hidden timer to count down and transition through a room to force its disappearance or hide in a cabinet. Just don’t hide in a cabinet when the monster’s still in the room, because obviously he’ll find you, you joker.

Sometimes the Oni’s appearance is scripted, with it popping out near something you need, making getting that thing rewarding when you eventually shake it off. But oftentimes, the Oni’s appearance is determined randomly, coming out of a random entryway to start chasing you down. On one hand, its random appearances ended up taking me by surprise at times and it kinda creates suspense in that it could pop out at any time. On the other hand, I was sometimes actually mad because I was too busy looking around for puzzle stuff. I’m trying to solve puzzles, you stupid asshole.

Now the puzzles, whoo boy. A lot of the solutions in the game just doesn’t seem to be obvious. Like for example, at times you need to push furniture around to continue on. Pushing a chair to to reach something that’s high up? That’s reasonable. Pushing a chair into a separate room to get something in there? That may not be obvious. Pushing two bookcases that don’t look different from the other bookcases in the same room to get to a panel behind them that you wouldn’t have known was there? Fuck off with that. I was stuck for a while because hey, how could I not know how to put a lightbulb in a headless doll then cut the wall that the shadow points at after you turn off the room’s lights? This mansion sucks.

So, let’s talk about the mansion and the monster. The nature behind them is unknown, possibly mystical. Whenever the Oni kills one of your friends, they themselves become Oni, their bodies morphing into Oni with your friends’ hairstyle. Which actually looks funny to me and kinda mitigates the body horror. What makes this power of the Oni horrifying is that there’s the presence of jail cells throughout the mansion grounds. Like, did the Oni capture people to kill and turn into copies of it? Maybe the place was actually meant to sacrifice people to the Oni?

The last part of the game takes place in a separate building on the mansion grounds that sorta ramp up these implications, coming off more as a jailhouse than anything. If people were captured to turn into Oni, where would they go? Why, there’s this whole room full of different types of Oni, that also holds one of the last keys to escaping. Were all of these like, proto-Oni? Were they always around or were they also normal people morphed into this? They honestly freak me out more than the normal fellow chasing you around. The mansion and all these Oni brings up questions that gives the game a bit of mystery.

However, I see this room as a room of lost potential. Like, it’d be real rad if these other Oni showed up to chase you instead of the usual ones that sometimes has goofy hairstyles. In fact, the game does do this at one point with the blocky Oni, who appears earlier in the building in a scripted chase. It even has a different movement pattern, with it sometimes pausing before making a mad rush in one direction, so maybe these other Onis could chase you in different ways to give variety to the chases.

I think this last part of the game was my favorite segment. The ambiance was nice, the puzzles weren’t as bizarre as previous areas and it actually freaked me out the most. My favorite scare in the game was actually the climactic one. You find one of your friends that you thought was previously lost and he joins your party, appearing in the status screen with his own sprite. But the moment you open up the menu to insert pieces of the last puzzle, his sprite’s suddenly morphed into an Oni that gives you one last chase when you exit out, which I thought was pretty neat. You escape the mansion with this ghastly copy of your friend chasing you and you get away, with an ending cutscene showing some other sap trapped in the mansion, the Oni cornering him. Which would be scarier if the animation of the Oni running toward the guy from his perspective didn’t look so dang goofy.

There are also a bunch of cheat codes for the game that you can put for your name, which are given at the end. Putting down TIMER shows the hidden timer that counts down to when the Oni stops chasing you, for instance. The most noteworthy code definitely has to be the SOUTHPARK code. Everyone’s sprites turns into South Park’s art style and the dialogue changes to be more ridiculous and have references in it. It’s pretty much the silly mode of Ao Oni. I don’t like South Park, but honestly, the fact that the creator took the time to make this is commendable and it honestly had more spirit than the original game.

In comparison to a lot of horror RPG stuff, Ao Oni isn’t too interesting and playing it honestly kinda frustrated me. However, it was a pretty early one, so it set up a bunch of the standards that later games did, but better, so it’s important from the standpoint of the horror RPG community. But also like. Corpse Party released around the same time and that’s way better. 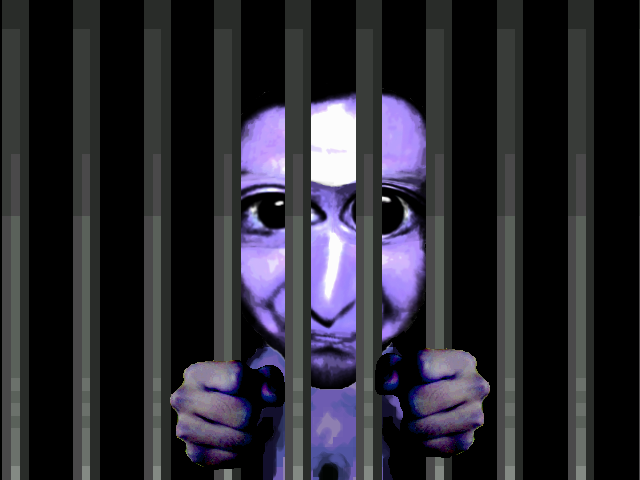 What boggles my mind is that there’s a bunch of adaptations of Ao Oni? Like okay, there’s a fangame community, which is to be expected, but there’s actual commercial adaptations. There’s a series of novels, a film, a second film that isn’t a sequel but a re-imagining and a bunch of anime shorts. In fact, there’s an anime film coming out this year? I guess Ao Oni having a small amount of personality opens room for more creative liberties, hence why there’s a bunch of adaptations. Heck, maybe Ao Oni will get a Steam remake one of these days that makes the game better. Corpse Party and Mad Father got releases for Steam, so maybe a better version of Ao Oni will come out one day.