80 Days is a narrative game by Inkle and it is an adaptation of Jules Verne’s Around the World in Eighty Days. You play as Passepartout, the valet to rich guy Phileas Fogg, who’s taken on a bet to travel around the world within, well, eighty days. 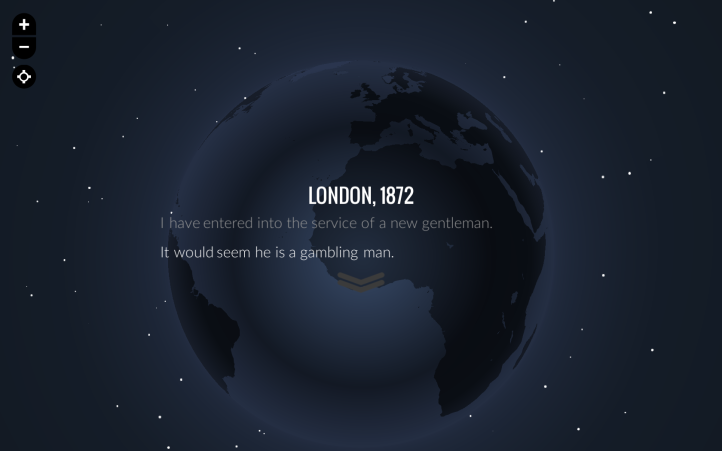 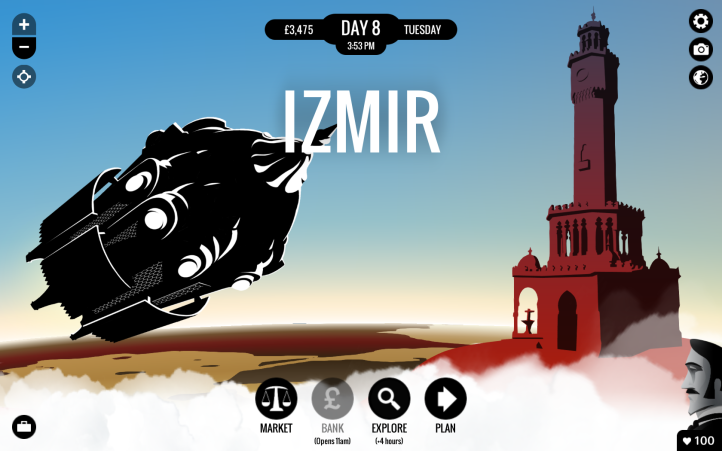 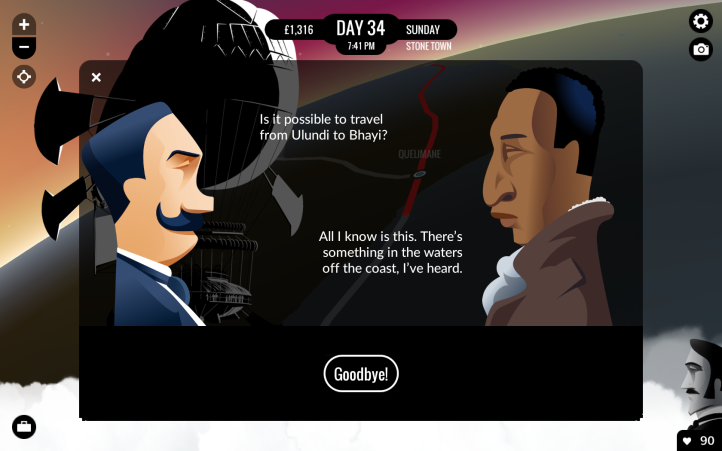 80 Days is an alternative history that embraces steampunk creations. Playing through, you’ll see that history diverges in some places because of steampunk. The Zulu Kingdom, for instance, created an army of automatons to deter invaders, reforming as the Zulu Federation. An international, neutral order called the Artificer’s Guild now exists, developing a lot of machinery seen in much of the world.

However, while being a more glamorous alternate history, 80 Days does not whitewash the sins of the past, either. While the World Fair at the beginning presents us with a world of global cooperation and peace, further travels shows that it’s still a world with problems. One city refuses to host the Artificers because of their acceptance of Jewish people, slavery is still a thing and imperialism is still rampant (well, blatant colonial imperialism, anyway). As a Frenchman traveling with an Englishman, the duo of protagonists are often confronted by the results of colonialism and sometimes met with hostility. The game however doesn’t treat it as a “product of its time,” as even passive responses indicate disgust toward these issues. I do appreciate all this, because while I hate past bigotries being presented matter-of-factly, pretending it never happened at all is bad revisionism.

Traveling this alternate history has you hopping place to place, taking brief tours to learn new possible routes and perusing marketplaces. Some cities present their own sub-plots, which sometimes lead into bigger sub-plots like the hunt for a sea monster along Saint-Denis that takes a rather drastic turn. Much like the history of the world, you can also diverge from the original book through the multiple paths you can take. For me, I traveled down much of Africa before hopping around Southeast Asia, culminating in an attempt to sail to San Francisco that diverged to Honolulu. With the different possible routes and different stories you can stumble upon, there’s a surprising amount of content that may warrant multiple playthroughs. 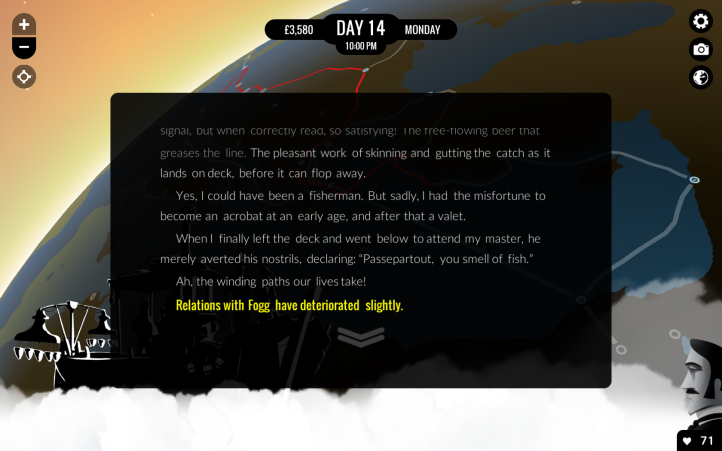 I find the game’s choice of putting you in the shoes of Passepartout instead of Fogg to be interesting, yet sensible. I feel that in another game, Fogg would be the ideal protagonist, with Passepartout as the bumbling sidekick that he already kinda was. However, in a narrative of choice, Passepartout is a better fit as an everyman that can accommodate whatever inane choices you make than Fogg, who’s already defined as an eccentric stoic rich guy. And look, if somebody’s running around doing inane stuff, it’s not going to be the rich guy.

While loyalty to his charge’s quest is a consistent factor, dialogue choices can play Passepartout as whatever you want. He could be a brave, honest man, or he could be a coward. Passepartout could be a man that holds genuine respect for other cultures or you could play him up as a nationalist that thinks France is better than everything else. Whatever the case, your choices as Passepartout is probably better than “pressing triangle to give a ‘we have a dream’ speech.”

As for Fogg, one of the game mechanics is to tend to his needs, because man, he is whiny. Gotta keep his comfort up or – well, I don’t see what happens when it reaches 0, but I assume it’s a game over. A large source of discomfort comes from travel conditions, which you can repair with certain items or resting at hotels. To prevent travel discomfort, you can buy sets of items to make the trip more bearable for him, depending on the conditions of a trip.

So that leads into the trading mechanic. Some places you stop at lets you buy and sell stuff. You can buy some stuff that makes Fogg less of a whiner, negotiate travel options, or access new options. During some travel or exploration segments, you can get hot tips on where you can resell things for huge profits, which can influence your travel plans. For instance, in my playthrough, I originally had no plans to go to Pyongyang, but then I picked up a rebel flag in an event that sells for a shitload over there. At first, this mechanic seemed kinda eh, especially since you start out with a lot of money to begin with. But you really do have to pay attention to this stuff. The trips really eat into your funds and you’re likely to get low at around the halfway point. While the story is the main event of 80 Days, I couldn’t help but get invested in the trading stuff. I sort of have my own worries about budgets and shit and that just sort of rubbed off on the game. Spend responsibly, and make sure to listen to those trading tips, because they ultimately do matter.

You can play past the 80th day, but honestly, I figured that the victory would be rather pyrrhic, so I reset from my first, failed run. As it turns out, as fascinated as I am with planning, I am actually godawful at it and the events of my last days were just a further kick in the shin: I tried and failed to plan a mutiny that ended on the deadline anyway and because of events at another city, Fogg was stranded in Honolulu with cholera for several days after the fact. If you’re a wiser person than me, you’d probably be able to clear the deadline, no problem.

Of course, I have no problem with doing another run. I found 80 Days to be engaging even though I sucked pretty fucking bad at the planning parts. As I’ve said before, with the different cities, routes and sub-plots you can encounter, there’s a lot here to demand some replays. If you’re looking for an interactive story experience and have the sense to not get Detroit: Beyond Human, please consider looking into 80 Days! You can get 80 Days for $9.99 on the Steam Store – or, you can get it for $4.99 on iTunes or the Google Play Store, which, considering the interface of the game, is probably the best option.