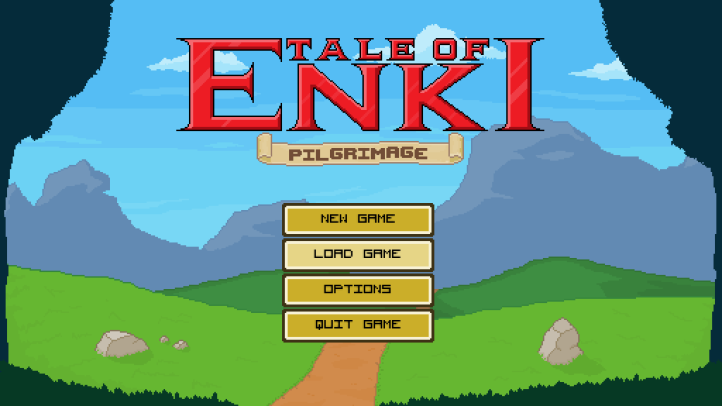 Today, we’ll be looking at a demo version of Tale of Enki: Pilgrimage, by Enkian Games. This is a change of pace for me, because this is the first time a developer ever emailed me about checking out their game. They recently put out a demo of their game and asked me to take a look at it, and boy, does it make me feel legitimate.

You play as an ogre named Gargan. Gargan steps out of his room and… his dad starts roasting him for being an ungrateful freeloader and kicks him out of the house? Alright. Gargan, just sorta thinking on the fly, decides to show his dad that he’s not so useless by plotting to get this ancient ogre artifact and… it all just feels really abrupt. All this covers the span of like a minute or two and it’s not even in some special cinematic form. It’s the intro of Space Funeral, except done sincerely and I don’t think it gives off a good first impression, just rushing the premise.

I’m going to have to be honest, it’s hard to really care about the protagonist’s motivations. Like, it’s not hard to see why Gargan’s dad wants him out, the guy is an asshole. He’s selfish, lazy and his entire quest is based solely on spite. I mean, I guess I dig the spite because it’s a big mood, but I generally found Gargan to be kinda unpleasant. Maybe the developers have some character development later down the line for him, but it doesn’t really show up in the demo. There’s also the fact that character motivations are introduced so quickly that it just feels kind of like an afterthought? Like, it feels that the game’s structure was thought of first and the characters second. I think that of all things, the writing of the main story needs to be improved to be more engaging for players. 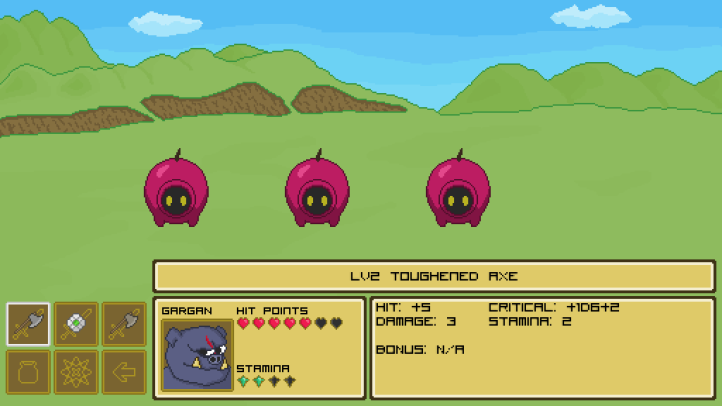 The battles on Tale of Enki runs on a stamina system. You select moves from the three weapons/skills you have equipped and spend stamina to execute them. You can use up all your stamina on the first turn to maybe try to take down the entire enemy group in one go, but it’ll leave you defenseless for a bit if you fail to do so. I kinda wish that instead of giving you full stamina at the start of battle, it only starts you with partial stamina to encourage players to think a bit more about usage. Like they could blow all that stamina in one go, or, they could build up stamina for a stronger burst on a later turn. Maybe something a bit more like Bravely Default‘s battle system?

The weapons you can get later in the demo takes up two stamina to use and you can equip it alongside your normal weapon. However, that’s when I noticed that using your basic weapons is actually more efficient than using an upgraded weapon. You could spend two stamina for one swing of the better weapon – or, you can take two swings with the basic weapon that does more damage if both hit, on top of giving you two chances at having a critical hit. The developers probably didn’t intend this outcome, so I’m bringing it up so that they could check on that.

Also like. I actually can’t tell if the armor stat actually does anything. I actually tried unequipping my armor and found that enemies were doing the exact same amount of damage than they did when I had them equipped. Gargan can equip a spell that can increase a party member’s armor stat and the demo’s boss has the same spell… and they don’t seem to do anything. In my test, I noticed that enemies hit more frequently when I had my armor off, so maybe armor actually affects accuracy? However, I’ve sometimes, had fights where I kept getting hit by the enemy team even when I was fully geared up, so I genuinely don’t know if that’s the case and if I’m just unlucky. I don’t know if a bit NPC explained what armor did, but even then, I feel that the armor stat’s purpose should be more clearer, if that was the case.

As Enki advertises, there are no random battles. Which is a good thing, considering that you only get money from battles. Since you can get some items and money through the game’s many sidequests, it might be possible to just go through the entire demo with only a handful of fights, which is actually something that I think could be real neat. Like, maybe the game could make it possible for players diligent about the sidequests to get through the game with a minimal amount of grinding, to make doing them feel more rewarding. 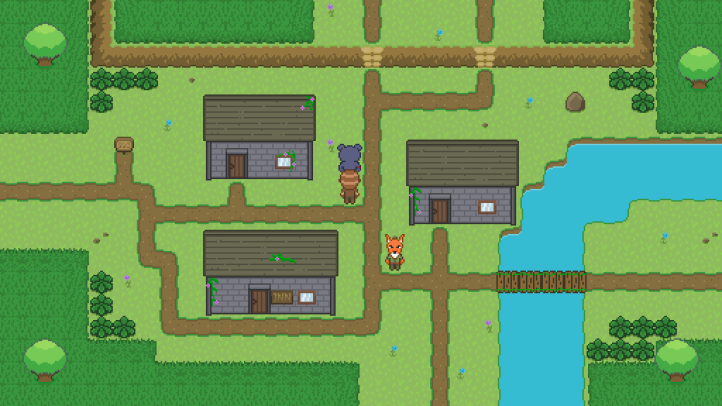 On the look of the game, I do like the general art style. It’s got a lot of nice bright colors and I think the environments have a cute look to them. I feel that the face portraits and battle sprites need to be touched up, but overall, I don’t think the graphics are bad – there’s flaws, but I like the direction it’s going. As for the game’s music, it isn’t necessarily bad per se, but I feel that it doesn’t fit some situations. The music in the second town conveys this epic feel to it, when the most you’d probably be actually doing is running back and forth these houses to help some lovestruck guy. Then again, the music is pretty much “fantasy western RPG”-core music, and that kinda music doesn’t really do it for me, so maybe I just don’t “get it.”

Now, something that I think the game should approve on aesthetics-wise is how the game feels. As somebody that’s played a bunch of indie RPGs, Enki, in its current form, doesn’t have the feel that I’d expect. When you touch an enemy, you’re just immediately thrown into the battle screen. It lacks a signature battle transition, that second or two that signals a player to get ready for a fight. The battles themselves also has this sluggish feel to them. It takes too long for an enemy to actually land a hit, so enemy turns just has these awkward pauses, and when they do hit, their sprite just sorta shakes weakly and their strikes are accompanied with a muffled sound effect. It just doesn’t feel “right.” In general, I’d kinda want more sound effects to better accentuate your actions.

I think that Tale of Enki: Pilgrimage has an okay foundation, it just really needs to build off of it better. At best, it’s okay, but it’s a demo, so hopefully the developers can make some improvements! A definite thing I recommend is for the opening to be more engaging, since for some people, the first impression might be their only impression. The demo took almost an hour and a half to play through, so it might be short enough for you to try and judge for yourself.