So I follow this Driftwood Gaming guy on YouTube, who’s a guy that mostly deals with RPG Maker MV stuff and games made with it. Recently, he’s also been looking at IGMC 2017 stuff (and I recommend checking it out if you prefer more visual stuff). I haven’t watched any of his coverage so that it wouldn’t affect my own judgement, but I’ve caught glimpses. Now, when I glimpsed into my feed yesterday, I saw that he made a 3 hour video on one of these games. Why the huge time sink? I got curious, so I decided to check out the subject of that video, Dungeon Down. 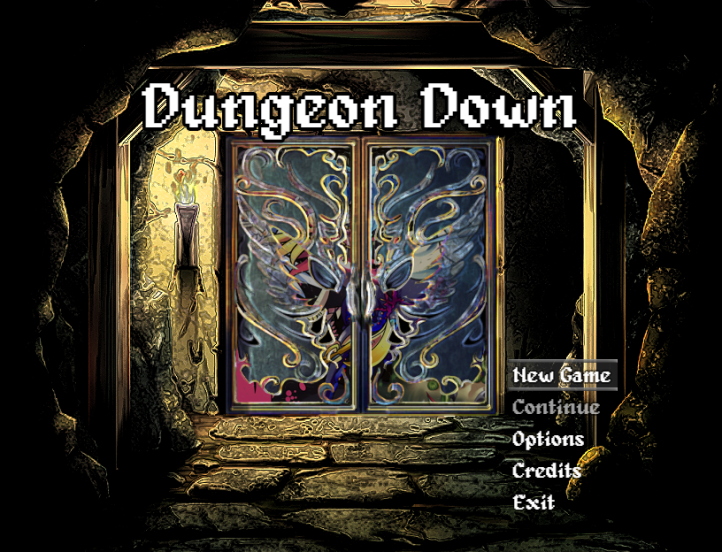 Dungeon Down is by luizcubas, a game advertised to be a “fast paced dungeon crawler.” Players might balk at the title screen, since it’s one of the engine’s default asset title screens, but I think this is a case where you shouldn’t judge a book by its cover.

You begin in a safehouse as an unnamed adventurer, a simple letter detailing the game’s instructions that you can check at any time. You are told to go down and explore the dungeon, with a goddess bringing you back to the entrance when you die or reload a save. That’s pretty much the plot right there.

You head toward the stairs, from which you can choose a checkpoint floor (1, 11, 21, 31, etc). Each floor gives a small randomized dungeon where you can pick up treasure to equip, ending in a sequence of fights. Picking up treasure kinda reminds me of loot heavy games like Destiny or whatever, with stats being somewhat random and equipment having a whole lot of tiers. Every tenth floor lacks the dungeon segment, but offers a trove of treasure upon beating the sole boss class enemy. 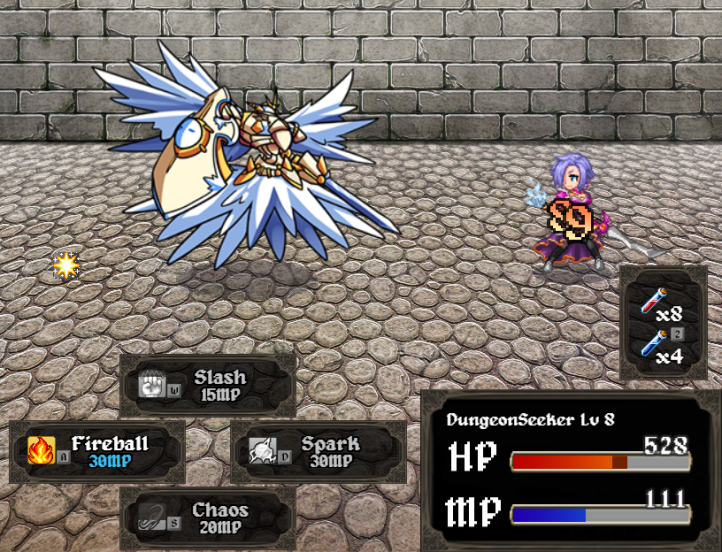 And so, we finally look at the game’s special active-time battle system. The system’s real simple, with no menus to screw around in to waste your time. Skills of different elements are mapped to your WASD keys and you can use an HP or MP potion with the 1 and 2 keys respectively. You use a move and wait for it to cooldown, which takes less longer if you take the time to upgrade it. A basic elemental system is in place, with fire skills screwing up ice-typed enemies while being ineffective against other fire-types and water-types. You’re told what elements the enemies of a floor have in advance, so you can equip needed skills and upgrade them beforehand. Most of the battles are nice and quick, a lot lasting for less than half a minute, especially if you’re taking advantage of elemental weaknesses.

I think this battle system is real great. Complex battle systems are nice because they offer variety and encourage tactical thinking, but simplified battle systems are great in their own right. The simple battle system can be more inviting to casual players and fits the quick pace the game’s trying to for; I also think that simple systems fit active-time battle systems better, because you don’t have to worry too much about strategy or setting up buffs or whatever while enemies use the time to beat you up.

When you’re killed, you’re sent back to the entrance of the dungeon. You keep your levels, gold and skills, but you lose all your equipment – unless you’ve used an Eternum Stone on them before death. Worry not, because you can use that gold to buy equipment and items from the shops and you can upgrade them further to buy better equipment. This point is important starting from the 80th floor.

After reaching the 80th floor, each floor onward has a boss on the level of the “tens floors” bosses, each one representing one of the game’s elements and progressively getting harder. With chests never spawning except as a rare reward and no normal encounters to fight, the game essentially becomes a boss rush at this point. From here, you can easily buy needed equipment and items at the entrance and the bosses give enough money to buy them back on retries, so the game’s priorities switch from gathering equipment to focusing on improving skills so that you can kill the bosses faster than they can kill you.

People may argue that the game is repetitive. And it kinda is, especially with the game’s switch in priorities starting at the 80th floor. But as I played it, I fell into the same trap I fell into with clicker games. It’s a simple enough game that it’s easy to get sucked into, but with just enough depth to keep me invested. The randomized loot called to me, asking me to gather a whole lot of them and look through for anything worthwhile to equip. Then there’s that desire to see those numbers you can push out increase, so I kept at upgrading my skills. Dungeon Down exhibits a lot of simple but addictive systems in video games. All it needs are loot boxes and it’s pretty much your modern day video game. 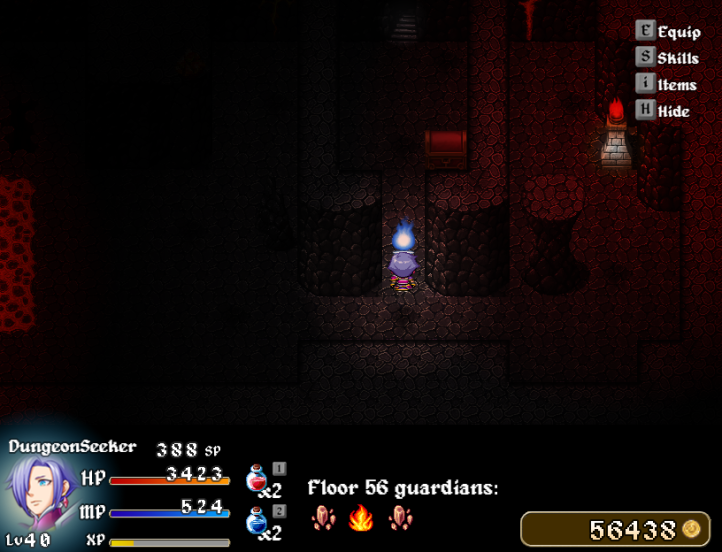 As engaging as the game is though, there’s some problems that need to be addressed. The most obvious one is that there’s no story. In fact, there is no narrative to speak of. Your character doesn’t even have a name, for crying out loud. The gameplay is Dungeon Down‘s main hook and while I think that it’s a good hook, there’s nothing else to encourage players to press on in the game, which might be a problem if they’re not already hooked.

There’s also the randomized dungeon bits before you fight a floor’s encounters. I like the idea of them, but also, they really don’t serve any purpose besides acting as a medium to get treasure and to run around in for HP and MP regeneration to work their magic. As all encounters are set at the end of the floor and their make-up is told in advance, there is no sense of danger. The fire themed set of floors offered damage tiles, but the damage they did was negligible, especially with HP regen in mind. Sure, maybe story isn’t important for a game like this, but I think that the dungeon segments can stand to be more meaningful, if the creator ever plans on working more on this.

Is Dungeon Down a perfect game? No. But Dungeon Down is a game that grabbed me and might be one of the most engaging entries in IGMC, at least in terms of gameplay. I kinda picture this game to be something that you can find on iPhone or whatever and I honestly think the creator could go for publishing it on those stores with some improvement.