And so, I continue looking through IGMC stuff. You know, when I first started this blog, I promised myself that this wouldn’t just become an RPG Maker appreciation blog, but as that meme says, life comes at you fast. So anyway.

PALETTA is brought to us by Cosmic Latte/Team Cola. Now, this game showed up in my feed when it first released because I’d been following the development team beforehand. The development team had previously made the demo of XV, an entry from the Dream Diary Jam and it managed to be one of my standouts. This is the first game the team had finished, so I was excited to hop into it.

A quick opening eases you in. A king ruled over the land, wearing a crown blessed with magical powers. However, a thief  tried to steal it and ended up breaking the crown into shards that scattered across the land, causing the death of the king, the disappearance of his daughter and creating unrest. A girl named Paletta, born of the moon, is told to head down to the world and look for the scattered shards to reunite the land and make things right.

The story has Paletta heading through the formerly colorful towns, seeking out the denizens who were fortunate (or cursed) to get one of the shards. You get a shard, the shard gives Paletta a nice new power to use, and you head out to the next place – simple structure. Paletta’s adventure initially starts pretty friendly, but soon devolves into something more hostile. Get a shard by gifting a town with a golden goose egg? How whimsical! Some shard holders offering you their shards in exchange for getting a cure that involves the blood of a shapeshifter? How ominous. For the most part, the story’s cutesy, but it knows when to be dark without being overly dark.

From a gameplay standpoint, PALETTA‘s an easy adventure game, which is perfectly okay. The puzzles aren’t very challenging and it’s easy to figure out what powers you need, but I’m not really complaining. PALETTA had a relaxed pace that feels matching of the game’s mood and aesthetics and I feel that any harder puzzle would throw that pace out of wack.

The art’s got a nice cute style, using limited palettes to represent the areas. While Paletta herself is monochrome, so are the different towns, the latter of which explained in-story as being the result of the crown being destroyed. Upon clearing the area’s problems, the area lights up with the colors that corresponded to the crystal you just got. 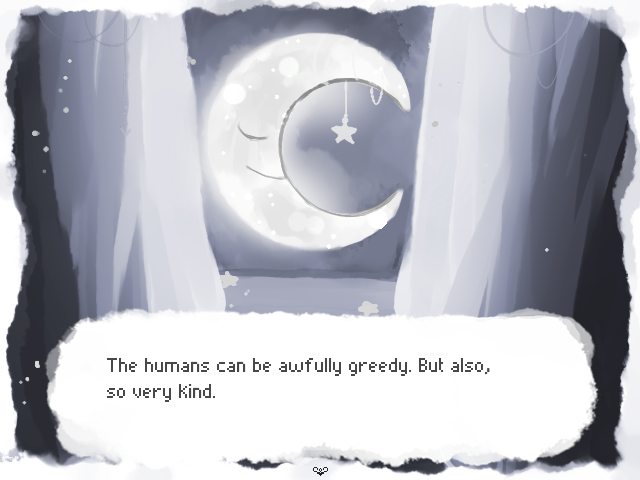 While the music isn’t original, the music selection for the game is pretty good. Generally for the areas before you get their shard, the music kinda has this depressive vibe, to reflect the whole state of the world. Then that music becomes something more joyful as you get a shard, accompanying the world filling with color, creating a hopeful mood as you head on. The music selection definitely does a good job with establishing how the game should feel.

The music also sort of carries this fairy tale like-vibe, if that makes sense. Think of some fantasy cartoon that’s made for kids. I think this vibe is most felt with the game’s opening and closing cutscenes. And you know what? Looking back, PALETTA kinda felt like a fairy tale to me. I can picture the stuff in the game, especially the visuals for the cutscenes, in some book.

So, PALETTA. It’s a cute game with a simple story wrapped in a nice, feel-good presentation. I honestly don’t have any complaints with it, except maybe wishing there was more. I enjoyed this and I think that it’s a strong contender for winning something from IGMC.