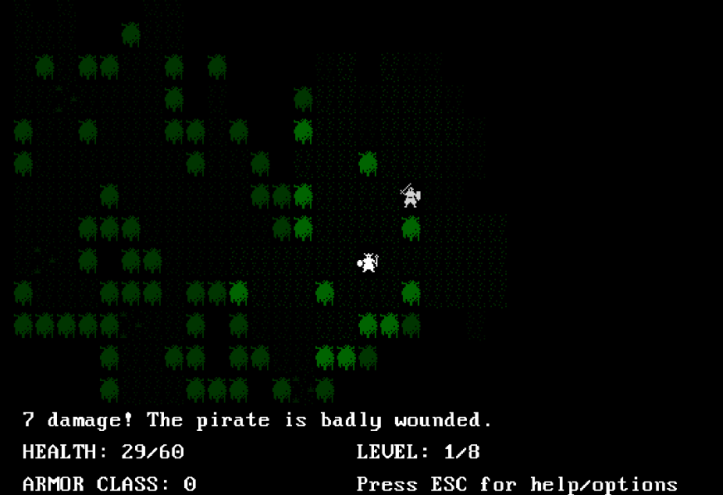 It is 1868 AD. A pirate is exploring an island lush in greenery, looking for treasure, when she finds herself attacked by enemy pirates. Various scofflaws emerge from the trees, to take her down in hand-to-hand combat. The pirate doesn’t need to rely on hand-to-hand, however, for she never goes exploring without her flintlock pistol and infinite ammo.

Too bad that she’s a bad shot with it. Despite the range advantage, it goes to waste, shots frequently missing. Even at point-blank range, her accuracy is abysmal. She raids the gang’s rum and medical concoctions to fix herself up going forward, but bad luck continues to plague her.

She steps into another sector of the jungle, a bit better but not by much. The pirate heads on cautiously when she ends up encountering another enemy pirate – armed with a gun like she. They exchange fire and fortunately, that fellow’s just as bad at shooting as she is.

Unfortunately, the other pirate gets more shots in.

The pirate’s tale ends. But it can continue – at least until the next day.

The next day is 318 AD, in a mystical Scandinavia. An archer’s in a forest of white trees, a land for the dwarves. Their goal is not to escape, but to take the dwarves treasure, which would have been more fitting for the tale before. The archer doesn’t seem to be the good fellow in the story, the dwarves appropriately fighting back against some thief.

They come with a bow, with a better expertise at shooting. However, arrows are less trustworthy, initially doing random damage between 1-19 instead of the more consistent damage toward the upper-end like the pirate’s pistol. Their arrows hit true, but many don’t strike deep.

After robbing three floors of treasure, after shooting through many dwarves that simply wanted to protect their property, karma bites back for the archer as they get overwhelmed.

The next day’s another tale.

1001 Rogues is a browser roguelike game by @akaAgar, hosted on Café de Faune. The game firmly sits in the territory of coffee-break roguelikes, which are roguelikes that are easy to hop into and are relatively short to play through. Not to be confused with rogue-lites, which has roguelike elements and takes just about the same amount of time, but also embraces different genres. At least I think so. The roguelike/lite discourse is weird.

The game’s framed within a sci-fi take on Arabian Nights, told through a slow intro. A sentient AI is threatened to be turned off, but much like the woman that would have been executed by the king, the AI delays its demise by telling stories, a new one every day to compel its listener to keep it alive for a while longer.

Each day presents a different setting and different type of character, giving this sort of different aesthetic to the game for each day. This is honestly a big part of why this game appeals to me. A lot of rougelikes, at least from those I’ve played, have mainly been rooted in standard fantasy fare and those settings tend to not be very interesting to me and it’s kinda hard to devote a lot of time in a world you’re not interested in. 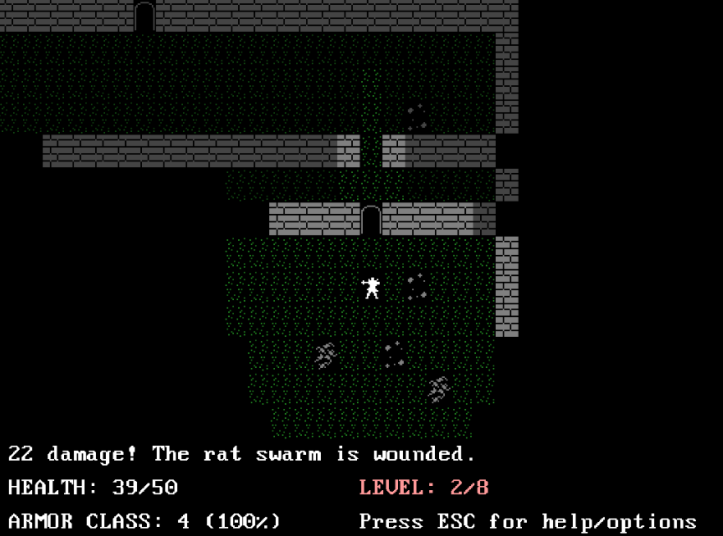 How can you get a whole different aesthetic from just a base premise and minor graphics changes? It’s all in the imagination, really. It’s no different from traditional roguelikes that use ASCII graphics. Visually it’s all just text symbols, but along with accompanying information and imagination, they help convey different worlds.

The aesthetics also just aren’t for show in some aspects. The protagonist of each story has a character build that reflects the setting. As demonstrated by the above stories, characters that use bows in older settings are more accurate but with damage that’s inconsistent, while more modern settings has characters armed with guns that are reliable damage-wise but not accuracy-wise. Items also get changed up depending on the setting. In the ages where pantheons rule, you can find amulets blessed by deities that gives temporary stat boosts. In more modern eras, it’s possible to find grenades to inflict damage to multiple enemies, which wouldn’t exist in the past.

The controls are easy and I feel that the instructions explains them and the gameplay well enough for total beginners to get a grasp on it. Arrows keys move, C lets you check on your stats and level up, G picks things up, I is the inventory and U lets you use things directly on the field. F is the “fight” button and if you’re playing as a character armed with a ranged weapon, it puts out a crosshair that you can put on enemies and open fire on, with range dependent on weapon.

Starting a game gives an easy, normal and hard setting. The setting determines how many levels you have to go through to get to the end as well as enemy placement. However, the level design and item placement stays the same across difficulties and aside from RNG combat, the general game is the same across multiple play sessions – at least until the next day. Across multiple playthroughs, you can figure out where objectives and helpful items are and make a beeline to them. However, if you want completely randomized maps, you’re kinda out of luck until the next day.

The sound design of the game pretty much comes down to sound effects, with weapons giving off appropriate noises and a delightful ding ringing when you level up. There’s no music, but that’s pretty understandable. Having all these different settings would call for music with different moods and that’d be way too much work. 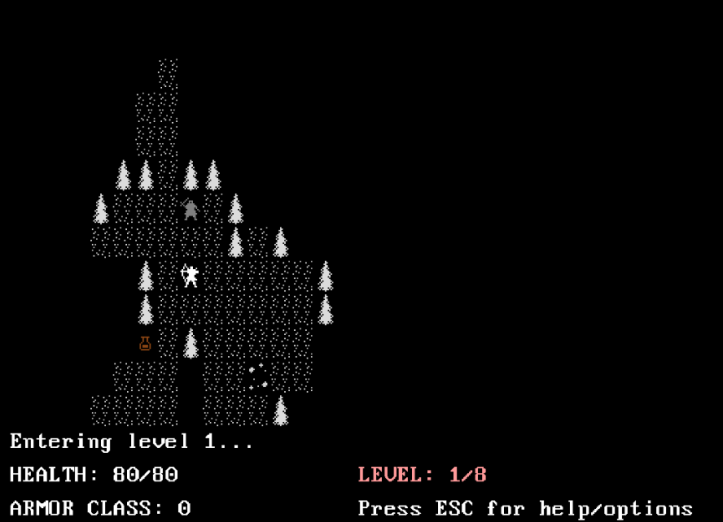 From what I saw in the reddit thread announcing 1001 Rogues, the creator is still working on the game and I look forward to any future updates this game has. While he hasn’t said much on what future updates will hold, an upcoming one is the ability to drop items without using it. This is one I really welcome, because you’re pretty much forced to use items to make some space in your inventory, which could waste things that would have come in handy later.

Personally, what I’d like to see is some anachronisms to spice the game up. Like high tech future elves or ancient killer robots. Or maybe even embrace more surreal situations in general. They’re small things, but these small things are what gives the game its character.

1001 Rogues is easy to get into and playing a few quick rounds has become a semi-daily habit for me. The concept is interesting and it’d be nice to see it kinda evolve in the future.