Ramblings: Eulogy of an Insect – Demo 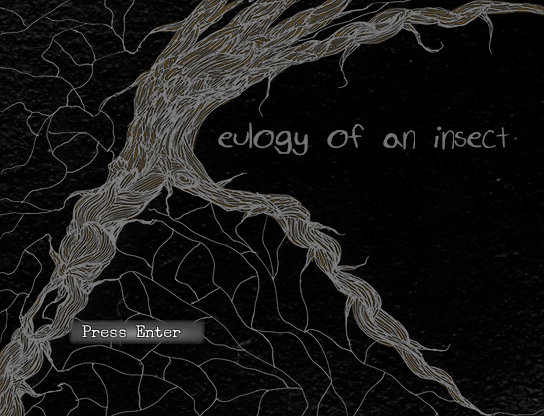 A woman named Charlie heads to her father’s home to find closure and instead finds herself in a different world. Armed with the relic Hermes, she wanders a world ruled by a crooked queen, putting up with all sorts of nonsense on a quest for answers.

Eulogy of an Insect‘s largely a two-man effort between David Ponce and Garret Stevens. It’s been in development since 2014, once going under the name A Piece for the Night. The game’s main inspirations are Yume Nikki and Middens, which really shows with its weird world.

The thing that characterizes Eulogy of an Insect the most is undeniably its art style. Some RPG Maker games use different art styles for their sprites, but this game rarely even uses sprites at all. Almost all of the characters and environments are drawn and painted over with pastels, creating a hand-crafted aesthetic that’s unique for RPG Maker games. Crafted characters run around on painted parallaxes, fighting deranged drawings against backdrops of paint splotches. Even some of the engine’s animations are redrawn in this style, which is real great. Some drawings may seem wonky, but I honestly do think that it adds to the charm.

Helping the aesthetic is the music, which feels like elevator music? The general vibe is like, calm grooves, which goes along with how non-serious the setting kinda is. None of the music is original, the soundtrack cobbled together from other artists. Like hey, you do what you do, I do the same thing. It’s fine if you’re not selling the game and crediting the artist, which the game’s readme file does, I guess. It’s a nice selection, though.

What contrasts the weird world of Eulogy of an Insect with the strange realms in its inspirations is that it doesn’t justify itself nor does it take itself too seriously. Yume Nikki‘s world is in a dream so the weirdness is justified, the Rift of Middens is a mishmash of different worlds, but Charlie looks at the very real stuff going on around her, briefly questions it, then she shrugs and just goes along with it, only wanting to know the most important answers. Eulogy of an Insect‘s one of those things that’s just confident in how weird it is, with the world being honest and actually having work put into it. Like, the first real town in the game is a colony of gangster bugs inside of a giant frozen corpse and it’s completely sincere with it and I love that. If your shit is weird and you’re not trying to justify it, you got to completely own and run with it. There is still a level of seriousness with some plot points, but it doesn’t really pop up until near the end of the demo.

This is also one of those few RPG Maker games that seems to actually care about the battles. The fights are all pre-existing encounters and all of them but the bosses can be run away from guaranteed (that or I’ve just been extremely lucky with escapes). Hitting A before the battle starts also has Charlie swing her mace and if it’s out when the enemy runs into you, the party starts out with boosted stats on the first turn, which is pretty nifty. The battles are hard enough to encourage using skills and prevents the game from being “mash button to win” while not being hard enough to be frustrating, especially the later boss fights. Status effects matter and soon enough enemies will be throwing out their own buffs and debuffs, so you’ll end up regularly using your own.

There are occasionally minigames and puzzle stuff that you have to do that breaks up the usual walking around and fighting, which I think is fine. The minigame segments are quick and simple enough that they’re not really obtrusive. I think the puzzles are neat and they have a nice variety, but two of the early ones rely on outside information: knowing what a certain number translates to in binary and how to do a basic physics voltage problem (which made me happy because wow that required class I took actually came in use). It does remain solvable in that you can just straight up buy the answer to the first one and the second one can be solved through trial and error, but if the game does more puzzles that use outside information, they should definitely be made solvable for people going in without that knowledge, ya know.

Hm, but what if you don’t want to deal with heavy battling and just want to do the puzzles and appreciate the game’s aesthetics? Say no more, friend, because the game also has an easy mode. Battles are easier and you get more experience and money (excuse me, BUGS) from fights, so you don’t have to fret about them too much.

Of course, this is still a demo for a reason. I personally think that the game’s balancing needs a bit more tweaking, with my main complaint mainly being that it takes a while for new skills to be learned. From a technical standpoint, I’ve also run into a few game crashes after emerging from a battle. Strangely though, these crashes only happened to me with the new enemies on the second floor of the pagoda area, so maybe there’s something specifically wrong with this area?

I got through the demo in like, an hour and a half and I had a good time, despite the crashes. So, I guess I’m looking forward to the rest of Eulogy of an Insect when it comes out. As far as I know, the game’s going to be free. However, if you like the art in the game and want to see something in its style, consider commissioning the game’s artist. Love art, pay for art.

Game of the Year Awards