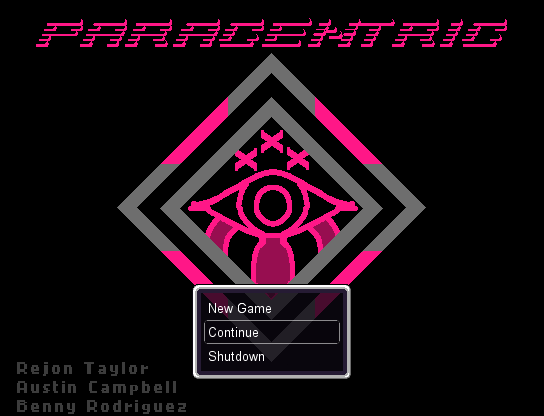 Paracentric was a game made for a game jam that was inspired by Yume Nikki and OFF. I really liked both games and this game can be completed in under half an hour, so I thought it’d be down my alley.

You are a locksmith that can go by the default name of Zeiss, who inexplicably found himself in a void on the way home. A talking sign named Icono greets him before Zeiss heads on his way, forced to go through the Zones to get home. The Kings and Queens, in bizarre acts of censorship, has outlawed a sense in each world in a “hear no evil, see no evil, speak no evil” type deal, but they’re the only ones keeping order. Also the game flat-out borrows from OFF in that if they didn’t exist, their Zones would become lifeless voids, so there’s that to consider. Zeiss is also helped out by the shopkeeper Vomero, funding his travels as he goes through the Zones on his way home.

The graphics are a mixed-bag, using placeholder RPG Maker sprites and its own stuff, but ya know, game jam. The finished stuff that is the game’s own is nice and surreal, though. The backgrounds for battles manage to be animated Earthbound-esque affairs instead of the static stuff RPG Maker VX Ace inherently offers, which is pretty neat to look at (if eye-straining). The enemies are filtered through static and blurs, which gives them an otherworldly feel that fits in with the surreal mood the game’s trying to go for.

The music for the Zones is atmospheric, for the most part. The Zone of Sight kinda has this ambient beat that reminds me a lot of OFF’s soundtrack and is pretty nice to listen to. The normal battle theme is a simple loop that gets pretty repetitive, though the encounter rate is so low that it ultimately won’t bug you too much. The boss battle music is a better remixed version of the battle theme that I recommend listening to with earphones because the sound is constantly bouncing between your ears, which gives this bizarre feeling while fighting the bosses which I’m real down with.

However, the actual fighting part of the game leaves a lot to be desired. The battles pretty much has you tapping attack over and over and healing every so often. The battles aren’t too hard, save for the final boss and the second boss, Larima, which is an absurd difficulty spike compared to the rest of the game because she can blind you. Which is thematically kinda dumb actually since the queen that actually censored sight is the first boss, Apthal.

The game’s advertised to touch on themes of censorship via its Zones, but it’s kinda mixed on how it’s handled. The Zone of Taste, where the people aren’t allowed to taste, is where the theme is taken most seriously. The censoring of taste allows the king, Gulsto, to pretend his land has no problems. After all, you can never have food shortages if the people aren’t allowed to have food. Meanwhile, this allows the king to abuse his power by keeping whatever food resources there are to himself. This corruption contrasts with the Zone of Hearing, where hearing is censored for… no real reason, actually? The boss doesn’t even properly talk to you, so there’s no motives or justifications beyond the “hear no evil” thing. The Zone of Taste was ultimately the game’s high point in terms of story to me while the preceding one was the weakest.

The game’s aesthetics were pretty okay while the gameplay wasn’t too exciting. However, this is still a jam game and I feel that if this was expanded and given more time beyond 24 hours, I would really love it. Even then the game’s pretty short, so there’s no harm in checking it out for yourself, I suppose.