THIS IS A SPOILER PAGE FOR HELEN’S MYSTERIOUS CASTLE – IF YOU’VE SOMEHOW STUMBLED UPON THIS, TURN BACK. 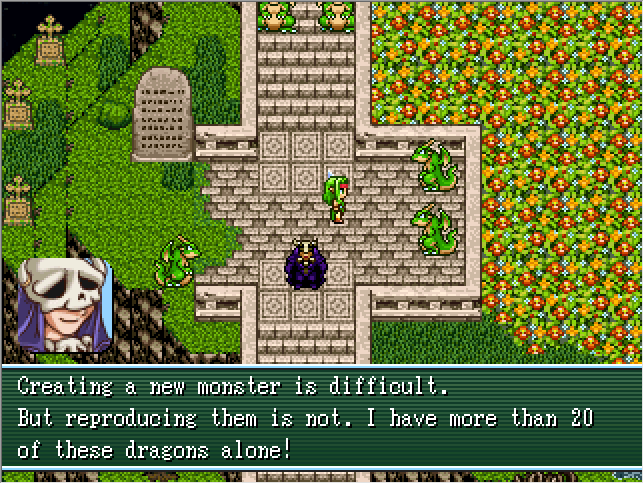 So this guy, with the skull helmet, is Krace, the final enemy in the game. Not your brother Ardis who created a monster army, not the human Zack, but this guy… who shows up out of nowhere. He actually is discussed in the game, but he does not show up in any form until the last leg of the game, which is a shock to all the characters since he’s supposed to be dead. There isn’t any foreshadowing that he’s alive in any way either, he just shows up and hijacks the last part of the story, once again wanting to lead a monster army against humanity.

Now, there is a sequence in the endgame that actually is real neat. All the NPCs in the game, including the monsters, aren’t having it with Krace and fight back against his army. You then control three completely separate characters – the Demon King, the Undead Knight and Zack – and use them to fight Krace’s lieutenants. This whole sequence gives you a taste of power, because now you are the bosses that previously gave you trouble and you’re using the moves they used against you to beat the shit out of Krace’s dragons. It’s a neat change of pace and I thought it was genuinely satisfying.

But, this cool sequence is actually ruined by what comes after. Krace tries to escape the castle and Helen gives chase. Then, the sun apparently starts to rise and the reason why he’s alive is revealed: instead of being exiled with threat of death like Ardis or simply executed, Krace was punished with a curse that makes him suffer in the sunlight. This is despite Krace being acknowledged to be the reason why Ardis’ monsters waged war on humanity and is essentially a war criminal.

Then it turns out the curse doesn’t bother Krace because he inflicted a bigger curse on himself. This also really isn’t a curse at all – his “curse” turns him into a buff demon that acts as the final battle. So yeah, he really got off light with his punishment. I will say that the battle was cool, though.

But what is the pay-off? What do you get after this climactic beatdown? Krace’s dragons show up and… he gets away anyway. Then your hero friend, Zack, the guy that came all this way to execute Ardis for supposedly breaking the barrier around the castle… also decides that he’s a threat for another day.

Like yeah, Krace was stopped from leading a monster army against humanity again… but also, you, as Helen, aren’t responsible for that. Literally all the other characters fight Krace’s army while your job is to go after him. And you fail that. The game’s final battle, the ultimate test of your understanding of the battle system and the enemy’s AI patterns, didn’t matter at all. Helen probably would have stayed put and fought Krace’s dragon army with everyone else and the story would have ended the same.

The game ends with a celebration party by all the NPCs and Helen leaving the castle and it’s meant to feel victorious (if bittersweet). Instead, I walked away with a sour taste in my mouth. The game had the audacity to throw in one last villain with almost zero build-up, gives you a tough battle against him and then lets him get away anyway. Aside from that cool sequence I mentioned, the endgame is bad and just unsatisfying.