Grist of Flies is a RPG Maker VX Ace game, made for Indie Game Making Contest 2015 by Razelle, winner of the genre reward for RPGs. The dead have been brought back to life, aided by unknown supernatural forces. In a matter of hours, the world is overrun, the only safe havens lying in bunkers. In this RPG, you play as a squad of survivors wandering a city’s underground tunnels in search of one of them, fighting monsters and meeting more survivors on the way.

What makes Grist of Flies stand out is how it handles the party system. Instead of choosing four characters out of your bunch of misfits to handle fights as you’d be expect, all of your characters pitch in as squads. Each squad consists of five people with different roles: Leaders that buff party members and restore EP (aka this game’s MP), Officers that protect squads and debuff enemies, Troopers that do physical damage and inflict status ailments, Scientists that act as this game’s mages and Doctors that heal. Each character have different affinities toward a role, an A affinity rating being where they best fit and and have a full range of skills while having a C affinity gives no benefits. However, characters also grant different benefits for A or B rankings. In the image above, Jasmine would ordinarily excel as a Trooper, but placing her as a Scientist would increase the squad’s overall power. It’s an interesting system that gives room for experimentation. 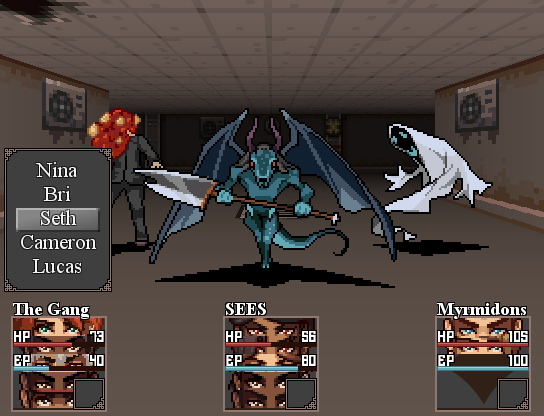 In combat, you can select any member of a squad and choose from their list of commands. Each squad gets to take two moves, the second move always coming after the first, which gives you a lot of options for a squad’s turn. You can use the first move to have a Trooper use a special move and the second to have the Leader immediately recover the spent EP; maybe debuff an enemy with an Officer and follow up with an attack so you can get rid of an enemy as soon as possible. Buffs and debuffs are pretty important, especially toward the late game, so make sure to make the most of them.

The game starts out kinda hard, mainly because you don’t have a lot to work with. Towards the end of the game, things are way easier if you’ve been diligently collecting survivors. The buff/debuff skills of a certain two characters are actually just too damn good when paired together, so the main threat for me toward the end of the game is managing the EP to get things done.

Although, you can argue that the game is easy in general. Running away from fights that aren’t bosses is a 100% guarantee and level ups mainly contribute to increasing HP, so there’s arguably not that much incentive to fighting enemies. Maybe you could like, I don’t know, speedrun through this.

On the subject of the game’s story, it’s kinda simple. You spend the game trying to reach a military bunker as this vague apocalypse goes on and nothing’s elaborated on said apocalypse. Some interesting things pop up, though they come off as sequel hooks more than anything.

I also feel that characters beyond your initial batch don’t get a lot of attention outside of their initial scenes and the occasional after-battle quip. Recruiting them also pretty much amounts to going to a side-area in the tunnels, having a brief talk to them and there you go, they’re rolling with you now; I felt that the game should at least make you work for their recruitment, like giving miniboss fights or whatever. It’s not too interesting and there isn’t much to get invested in. I honestly feel that this is a consequence of the game being made in a one-month time limit. At the very least, I like the character designs.

Speaking of that, I generally like the art of the game. The sprites for the characters are cute and I like the tilesets used for the game. The spotlight effect on your character while you’re moving through the tunnels also makes it feel kinda claustrophobic. Combined with the clutter and blood put all over these maps, it kinda gives this grimy vibe, which I dig. The enemy designs are also pretty nice, though you could argue that some of them come off as too cutesy for the setting.

Your tunnel crawling adventures and fights with dark beings is accompanied by music from a band called Black Math. Being a darkwave band, their music fits the game’s atmosphere, as Grist of Flies borrows a bunch from horror aesthetics but isn’t itself a horror game. I’m not sure about the lyrical parts of the soundtrack, but I mean, it’s more fitting of the game’s atmosphere than, say, peppy j-pop styled tracks. I wasn’t sure what to make of the soundtrack at first, but it really ended up growing on me.

Grist of Flies is a neat game with an interesting systems, though it’s somewhat easy and the story isn’t as engaging as it could be. So, will Razelle ever work on the game some more? The game ends off on a sequel hook, so he has to be working on a sequel, right? Well, if Razelle’s RPG Maker forum post history is any indication, he’s been gone since 2015, so I guess this is all we get. It took me about an hour and a half to play through, but, I didn’t run away from any of the fights either, so playtime could vary.