HOME – An OFF Fangame

It’s finally June, that time of year when most students are out of classes. For this June, the cult fanbase of Yume Nikki, unburdened by school, can participate in the Dream Diary Jam. Yume Nikki‘s got a lot of fangames to its name and this month is meant to encourage people to make some more. There are plenty of neat games like .flow and The Looking Glass, which are all games I think would be interesting to talk about.

So for today’s ramblings, I’m going to talk about a fangame for a completely different cult RPG Maker game, OFF. Going forward, there’s going to be a few spoilers for OFF, so maybe check that out before heading on.

OFF is a surreal RPG made by Mortis Ghost, which gained a cult status in the RPG Maker community and is one of the more widely known RPG Maker games known to actually be Good. Like Yume Nikki, OFF also has a bunch of spin-off fangames. One of the most well-known ones is HOME, whose development was led by Felix and originally released in 2014, with a few updates in the following years.

In OFF, you as the player is identified as the Puppeteer, an outside force controlling a puppet. This puppet was named The Batter, a stoic baseball bat wielding character on a grand quest to purify the world. An erudite cat named The Judge helps act as a guide during the adventure, letting the Batter loose into the greater world. Toward the end of OFF, it becomes apparent that to “purify” the world, the Batter intends to end it, the Puppeteer unknowingly going along with the plan until almost everything’s become “pure.”

So in HOME, it’s time for the Puppeteer to make things right.

The world seems to be reset from whatever end the Batter had brought it to, but the exact nature of what’s going on is initially unclear. The only definite thing is that the Puppeteer has turned their strings toward The Judge, who goes on his own journey, following a road similar to the Batter’s. While the Batter recruited impersonal Add-Ons during his crusade, the Judge teams up with other felines. With horrifically hungry Alain, his now-alive brother Valerie and dance happy Jozlyn, the Judge heads out into a different world.

At the beginning of the game, you’re presented with difficulty choices. You’re given the choice to set battles to hard, easy and normal. With regards to combat difficulty for normal encounters, the difficulty changes enemy movesets instead of doing universal stat changes. If playing on easy mode, enemies will occasionally defend or simply do nothing at all, giving players more breathing room. On hard mode, the enemies gain more skills to use, making them more deadlier. The major boss battles also end up changing, giving you bosses with nerfed stats and movesets if you’re on easy and giving the bosses that you’d have fought on normal more moves if you’re playing on hard. Also for hard mode, some save points are replaced with ones that won’t heal you. 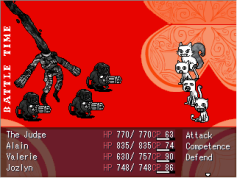 One of my biggest complaints about OFF was that it became too easy toward the end, with nothing really being a threat anymore. So I chose to go in on hard mode and honestly, I think the game’s hard mode is okay. For the most part, it wasn’t too frustrating. You also still make lots of money from fights regardless of difficulty, so it’s easy to stock up on healing items, making the non-healing save points a non-issue.

I will say though is that despite the difficulty, HOME‘s combat is still kinda unengaging, which was also a complaint I had with the original game. With the auto option, there’s just no reason not to use that to coast through normal fights when you feel that you’re strong enough and have the resources to heal up afterward. There’s an element system, but unless you want to take the time to check enemy weaknesses and remember them, it’d just be easier to wail on them with your strongest attacks.

There’s also a difficulty setting for puzzles. Certain puzzles are either simplified or made more complex depending on what difficulty you select. Also as a quick aside, if you choose to take the easy route with these options, the game doesn’t chide you or treat you condescendingly. That doesn’t sound like a big deal, but given the condescending attitude toward easy modes by gamers and sometimes the games themselves, it’s nice.

While the game has you traversing familiar places, it’s not a retread of OFF but With Cats. The original Zones 1 to 3 get some new areas and some old areas are changed up, either to keep things fresh or to simplify things. Zone 1, for example, has The Judge and the just-recently recruited Alain exploring the meatworks to take down a demonic butcher, while for the Batter it was only a detour. The last area for the Zone also has its puzzle simplified so that you aren’t required to tediously explore the whole area for a number sequence (like the original game) and the last stretch before the boss has a completely different puzzle from the “Lost Woods-esque” one that was originally in place.

HOME also introduces a Zone 4, which marks the point where the game heads into its own mythos instead of a remixed one. After a brief meeting in Zone 0 where the cats talk out the situation, they head into this new land. Zone 4 is the most overtly terrible of the Zones, as if serving as confirmation for the Judge ranting about how the world has become awful in the previous scene. Specters openly wander around as the Elsen citizenry fall to an unknown illness. The guardian of the Zone is unaccounted for and as a result, a bunch of Elsen have decided to fix the Zone’s suffering themselves and they do so by becoming a monstrous militia. Zone 1 had an order of harsh work, Zone 2 emphasized comfort, while Zone 3 was a mix – Zone 4 is none of those things, lacking any order.

As the game heads into more original territory, the puzzles also improve. The puzzles in Zone 4 and onward are more creative, since the surrounding area is built around them instead of the puzzles being plopped into them. One of my favorite puzzles is definitely a meta one that’s introduced before the final areas, which you can probably see in the game’s folder before even playing the game, but you’ll have no idea what to do with it until that point. 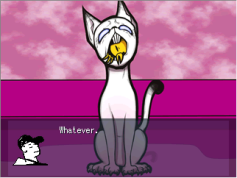 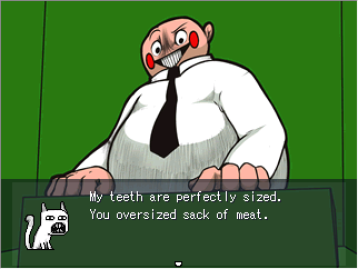 Presentation wise, the game’s solid. A lot of the enemy designs are cool and don’t feel like retreads of the canon enemies. Stylistically, a lot of the designs are more eldritch compared to the stuff in the original game, which gives them a more unique flavor. Credit for the monster design goes to @OutlanderS_3_S, who’s making her own game with her brand of art. There’s also some nice cutscene art that’s presented for certain scenes, usually when meeting party members or heading into boss fights. The game’s soundtrack also presents a mix of original songs and remixes that are usually atmospheric and while I admit that it’s not as memorable as the original game’s soundtrack, it really helps set the mood of the areas you’re exploring. While I’m real biased toward OFF‘s original battle theme, HOME‘s battle theme is really good in its own right and doesn’t overstay its welcome, which is you know, important if you’re going to be hearing it half the time.

I really do think that HOME’s a great game and a nice fan continuation of OFF, even with my gripes. I wish that I could tell Felix what I thought about his game, but sadly, he’s no longer with us, as he died in a car accident earlier this year. I never knew him personally, but he’s touched a lot of people and he was a pillar for the OFF community. HOME will continue to stand as a testament to him and a testament to the community it was made for.